The Great Shift: Celebration at Sawna

Background Lore:
Long ago, the Gods had separated, and through their separation, created the World and it's guardians, the Immortals. As the Gods tried to become close to each other again, they all died for no reason. This event, known as the Great Shift, gave magical powers to the Immortals, but also emotions and the ability to die. The Immortals, like the Gods before them, separated from each other and created their own children; the Mortals. With the world divided between the Immortals and their Mortal subjects, conflicts and chaos have become the new masters of this world...
Campaign Lore:
Fimbyul is a sacred holiday that rings in the new year for many Northern Peoples, especially the Elves. It is also one of the coldest times in the already cold north, with many people trying to stay warm through the Holiday. There are some places, however, that are immune to the intense cold of Fimbyul; one such place is the town of Sawna. Sawna, built on an active lava field, becomes a very popular tourist attraction for many Northern Peoples who want a warm Fimbyul instead of a cold one. This year, Sawna is getting a very important guest; one of the Marshals of the Elves, and their entourage of close friends and confidants. Hopefully, the Elven Marshal enjoys their stay, and this Fimbyul becomes the Best Fimbyul Ever.
Rules:
OOC Rules:
*RPING IS IMPORTANT! In fact, it is somewhat more important then Combat. When making a Character, make sure you will be able to RP as them out of Combat.
*BE KIND WHEN OUT OF CHARACTER! Don't insult other players or the GM. Doing so will kick you out of the group. You can be mean to each other in character, however.
*THE GM IS ALWAYS RIGHT. Even when he's wrong, he's right. If the GM is wrong he will fix his mistake.
*THIS RP IS HEAVILY ART FOCUSED! Your characters and the world around them will be presented in the forum as if it were an actual board game.
*In the Event your character is not fun to play in the game, the GM may allow you to make a new character to try, so long as that is possible and logical.
*Campaigns will be played from 12 PM to 10 PM (Eastern Standard Time), Thursday to Sunday. (The GM will message all players when he's ready.) The GM will be available Monday to Wednesday to answer Questions and do minor things 4 PM to 9 PM (Eastern Standard).
*For any Lore Questions, please ask the GM.
*Respect the rules of the URealms Live Forum please.
*The absolute most important rule is to HAVE FUN!

IC Rules:
*First is Character Creation. Character Creation is a 3-part system. The first step is to pick your Race and Class. The GM will then roll 3 6-sided die; you pick 1 for your Strength Roll (which gives damage for weapons and certain abilities, plus extra health) and 1 for your Gold Roll. With your Gold and Health tabulated, you then move on to the next part; buying weapons and items and picking abilities for your Character. Once everything checks out, then you can move on to the final part; creating your character. Giving them a name, appearance and background.
*The campaign itself is divided in to two parts; Roleplay and Combat. Roleplay is when characters interact with NPCs and each other through dialogue and actions. Movement is not restricted and Abilities do not use Health.
*Combat is when characters engage in a fight with NPC's or each other. Every Character has 2 actions, one to move and one to perform an Ability or use an Item. Combat is divided between Rounds (everyone performing a move and action) and Turns (one group of characters performing a move and action).
*Movement is how many spaces your character can move on the Battlefield; the map the characters exist on. In Roleplay, Characters are not limited by the number of spaces they can move. In Combat, characters can move up to 5 Spaces on the Battlefield once per Round, unless they have an Item or Ability that lets them move further. Certain Actions cause Targets to Move involuntarily.
*When performing an Action, in either Combat or Roleplay, you must roll a die to determine if it will succeed or not. All die rolls are performed by the Game Master, using 1 6-sided Die. The Die is divided between 2 sides; 1, 2 and 3 are Low Rolls, while 4, 5 and 6 are
*Items come in 3 distinct forms: Weapons, Tools and Trinkets. Weapons are the main Item used in Combat to harm Targets. Tools are extra Items meant to help with Combat. Trinkets are passive items that help in and out of Combat. Weapons and Tools do not work on Low Rolls.
*Abilities are used to help in Combat. Unlike Weapons and Tools, Abilities always work. However, on Low Rolls, Abilities take Health from you. Abilities can create Tiles, which are placed on Spaces in the Battlefield, give Allies Buffs, which help the Target in Combat, or Effects, which harm the Target in Combat. They can also just harm the Target.
*Damage is divided between Strength Damage (the number you Rolled for your Strength Roll), Weapon Damage (how much Damage your Weapon deals by itself), Spell Damage (Damage done by all Abilities, spell or not), Melee Damage (Damage dealt in one Adjacent Tile), Area Damage (Damage dealt to all Adjacent Tiles at once), and Range Damage (Damage dealt to one Tile up to 5 Spaces away).
*When any Targets health is less then, or equal to, 0, the Character must Roll a Survival Roll. As long as they Roll above a 1 on a 6-sided Die, they live, but gain a Survival Mark. Every Survival Mark adds 1 Side on the Die they need to avoid to live. A Character with 3 Survival Marks, for instance, must roll a 5 or a 6 to live. If your character fails the Roll, they die and are removed from the game.
Cards:
Races: 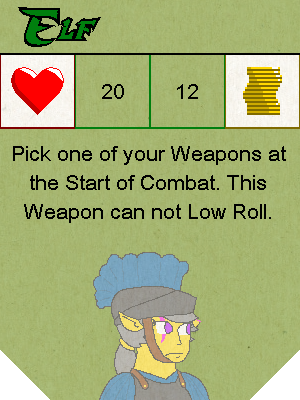 Elves are the metal Children of the slain Immortal, Dreyann. Through their creators death and their war against the skeletal Ageless, these master blacksmiths developed a culture of war that emanates throughout their society. 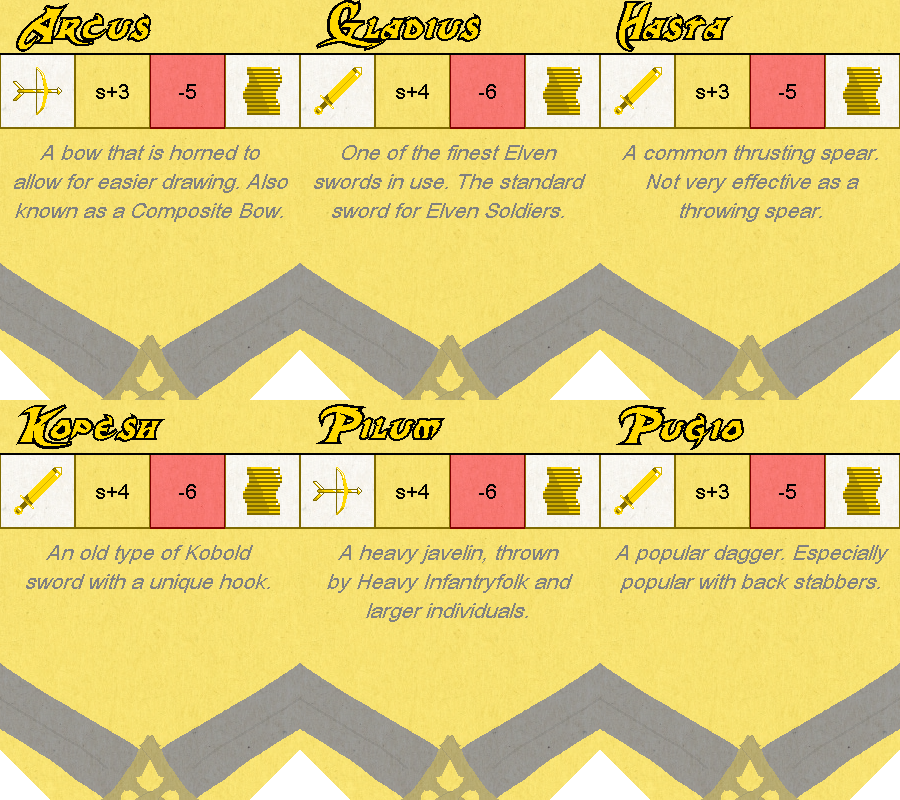 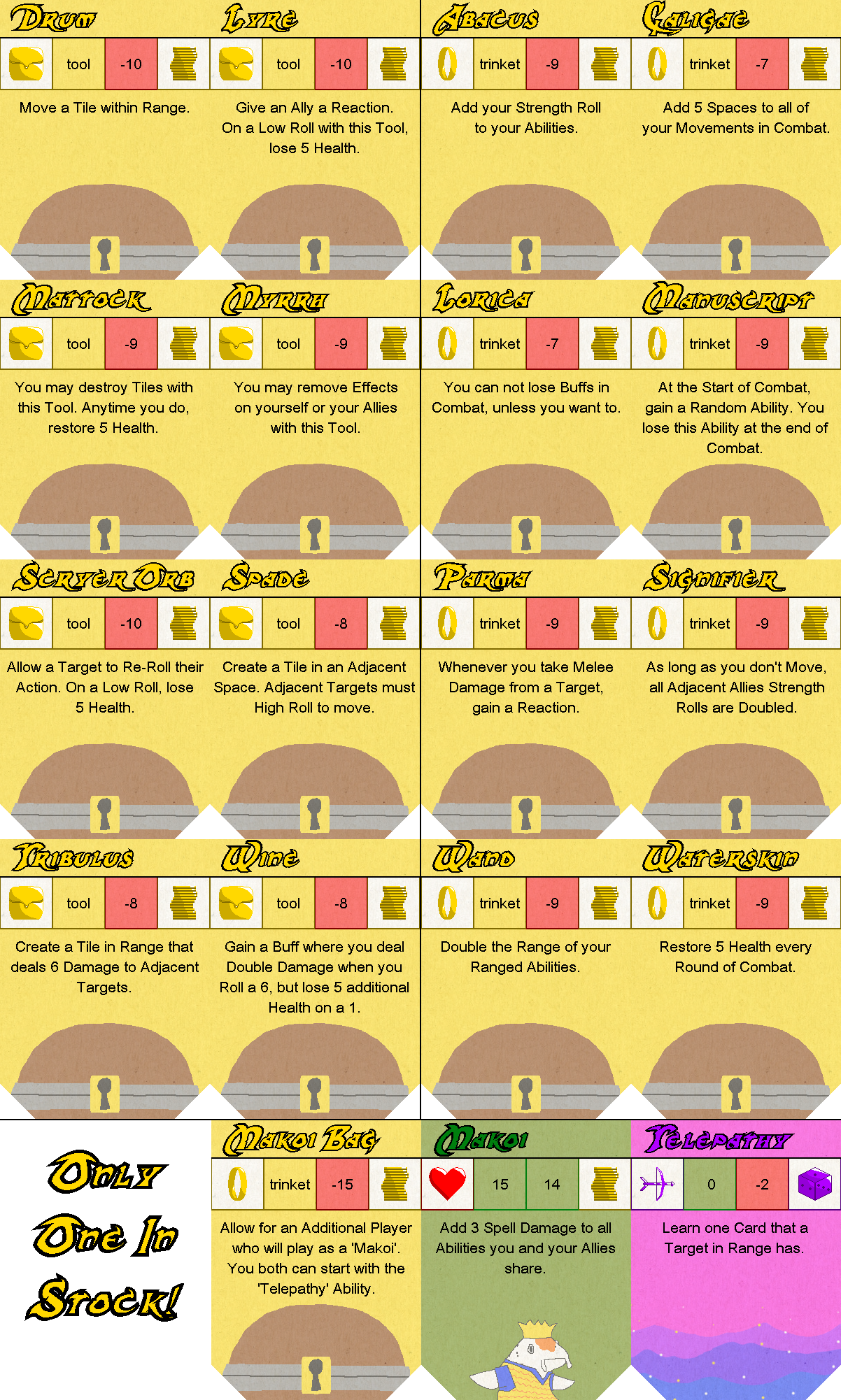 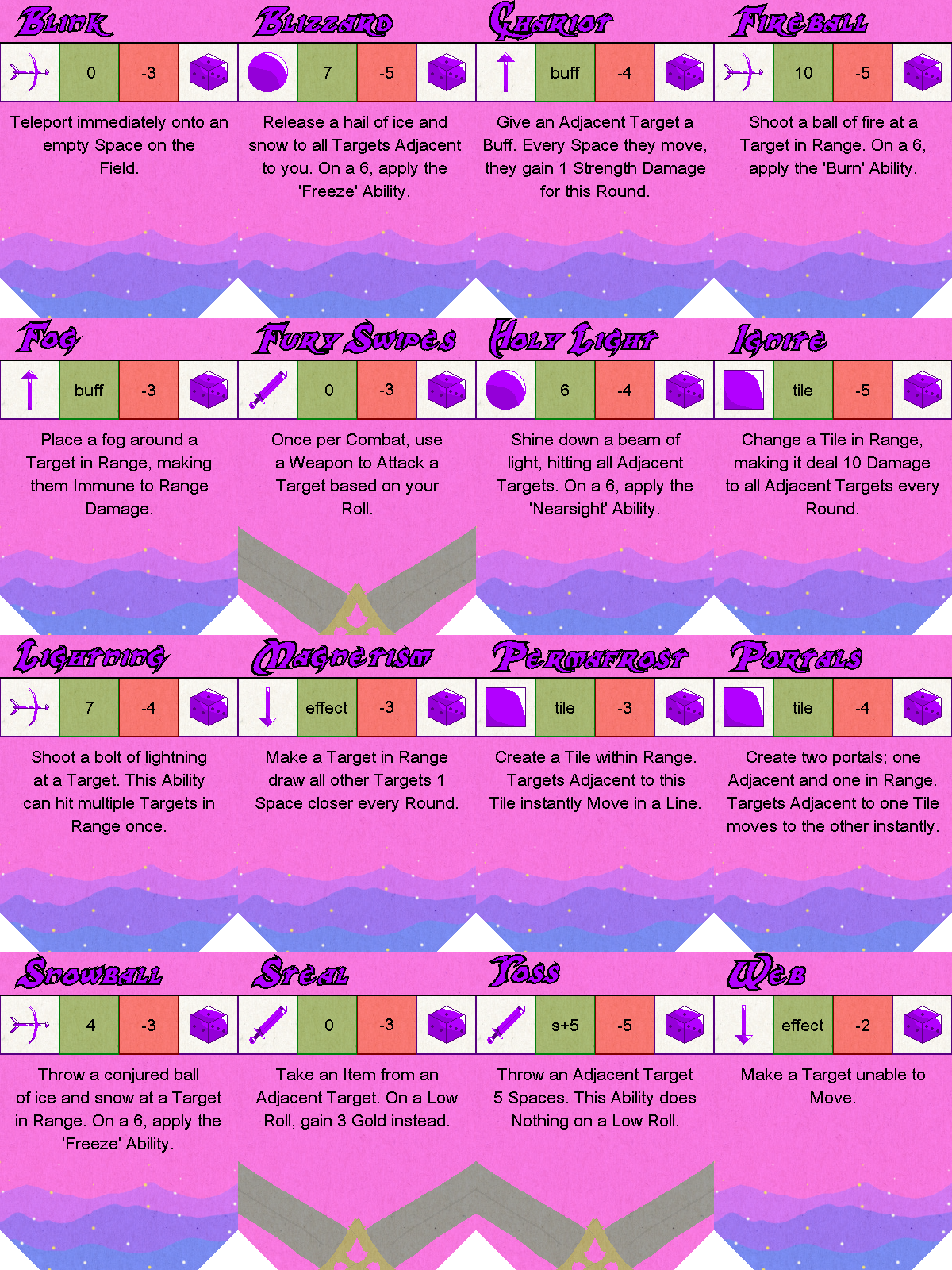 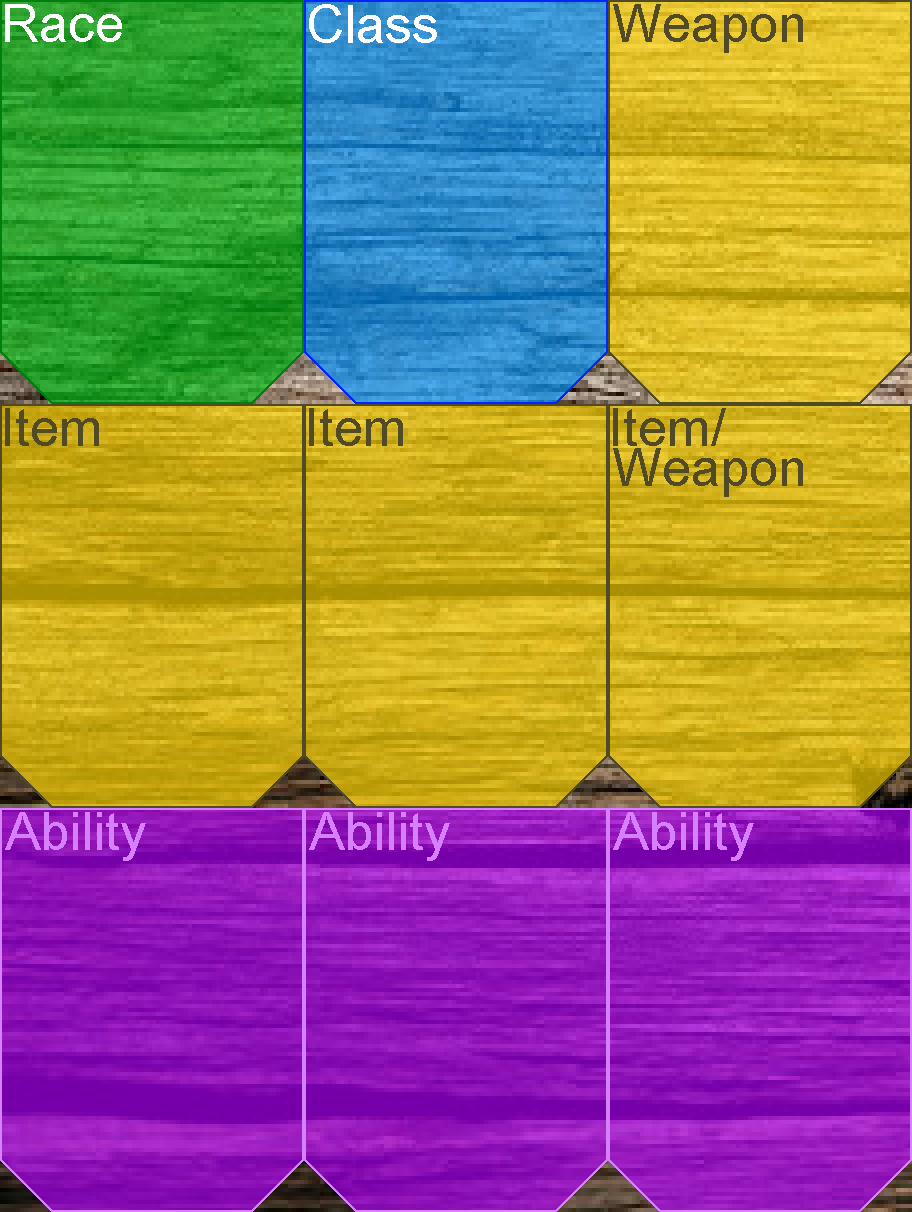