Quintara Lotus is marked by the old Gods

21
gameatic101
July 2019 in General Discussion
I am writing this on low energy, forgive any of my sprawled out thoughts and inconsistencies I might have.

So below is a picture of a sexy dragon that Rawb plugged in his most recent campaign, more specifically  it is a sexy picture of Quintara Lotus that was a gift to Galen Sunsword. How do we know this, because the description of this image in the official shop of Urealms states and I quote "This painting was a gift from Dragon Aspect Quintara Lotus to the love of her life Galen Sunsword. Unfortunately it was stolen by a very famous art thief."

From this information we know that this painting is from the Urealms and was brought to us through the Order of Chaos or some meta crap, either way this means this is a 100% canonical accurate painting of almost nude Quintara Lotus.

Now why does this being an accurate painting of Quintara Lotus matter, because if you look at her inner right thigh, you will see what appears to be a Mark of the Unforgotten. 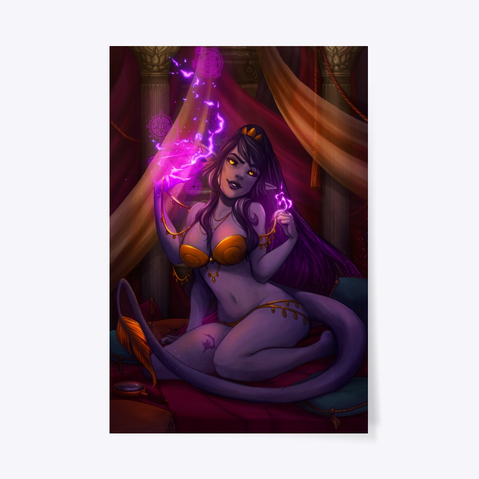 The only time I can recall that meta knowledge is introduced to Quintara Lotus is in The Sandbolds campaign when Millbee tells Quintara Lotus about Tom Hanks and Wilson when she sends him to an island for, what I remember to be, 100 years. This explains why she was so serious about him spouting out those names, because she recognized those names to either be of our world, or just not of her world, meaning the reason she didn't press the situation any farther with Millbee was because she was testing him to see if he carried a Mark of the Unforgotten, was controlled by an Old God, or was just actually unlucky enough to say a random few names that triggered her alarms. So if we rule out Quintara Lotus thinking Millbee's character was marked, because I am almost positive she is smart enough to determine that on her own, that leaves Millbee being controlled by an Old God and him being just an unlucky idiot. Now the chances of a Urealms character naming something Wilson isn't that low, but naming something Wilson and the uttering the phrase "Tom Hanks" is WAY too specific to make that a reasonable option in the mind of pretty much the smartest and most powerful character in Urealms. So that only leave Quintara Lotus realizing that Millbee, and maybe even some of the other characters. to be controlled by the Old Gods.

Now why Quintara Lotus has chosen not to act on this I have no clue, but I do know that she knows of us and not through some stories about the Old Gods, but by our own words, she knows that her life is not just that of what she sees.