[WIP] Scrolldom, a TTS board-game based off URealms and D&D

29
Sonderp
May 2018 in Custom Miscellaneous
For a school project, I made a board game that takes heavy inspiration from URealms. I intended it to be a sort of uber-simplified version of URealms, to the point where it doesn't even need a game master (though if I do a bad job of writing the rules, there would need to be someone who'd judge how it should be interpreted). I used the URealms card creator to make the cards for it, the map is just drawn with the Vector Paint at the moment and I used Miryks' Terrain tiles to show spaces where cards need to be drawn from.

At the moment, all the cards and the rules are in Norwegian, but if I ever get properly done with it and not just to like a "good enough to get a C" level, and I'll translate the rules and cards to English, I'll update this thread. Maybe even with a link to a TTS mod if I get it to that point.

So what exactly is this board game?
Well, the goal is pretty simple, get to the end of a "cave" infested with monsters that usually guard loot and spell scrolls. You'll be competing with other players to be the first to reach the innermost part of the cave. There are multiple paths in the cave to take, some are longer but empty, others are filled with monster that needs defeating but are shorter and has prizes for defeating the monsters.

You'll fight the monsters and other players by entering a variant of restricted rock-paper-scissor, but instead of having cards for rock, paper and scissors, you have spell scrolls for a fire, ice and earth spell. Fire beats Ice, Ice beats earth and earth beats fire. You can stack spellscrolls of equal type to get more powerful variants of them, to the point where a Level 3 fire beats a Level 1 earth. But even if you have an advantage with the cards, you still need to roll a dice, a D6 to be specific. The elemental matchup with the spell scroll stage just gives a modifier to how many eyes you get on the D6. For example, even if you absolutely crush an Ice 1 Spell with a Fire 3 spell, you could still roll a 1 while they roll a 6 and get beaten by the one with the Ice spell. If you do get beaten hard enough by the opponent or a monster though, you'll basically have to death roll with a D6.

Other points of inspiration I didn't previously mention:
Skyrim - One of the enemies is pretty much had their name ripped directly from Skyrim.
Kaiji: Ultimate Survivor - The main draw of the battle system is mostly based off the limited Rock, Paper Scissor system that's shown off and used in Kaiji. I didn't just rip it off though, I more made a system based off it, by combining it with Dice rolls and theming it around different elements of magic.

Here's a screenshot of how it looks at the moment: 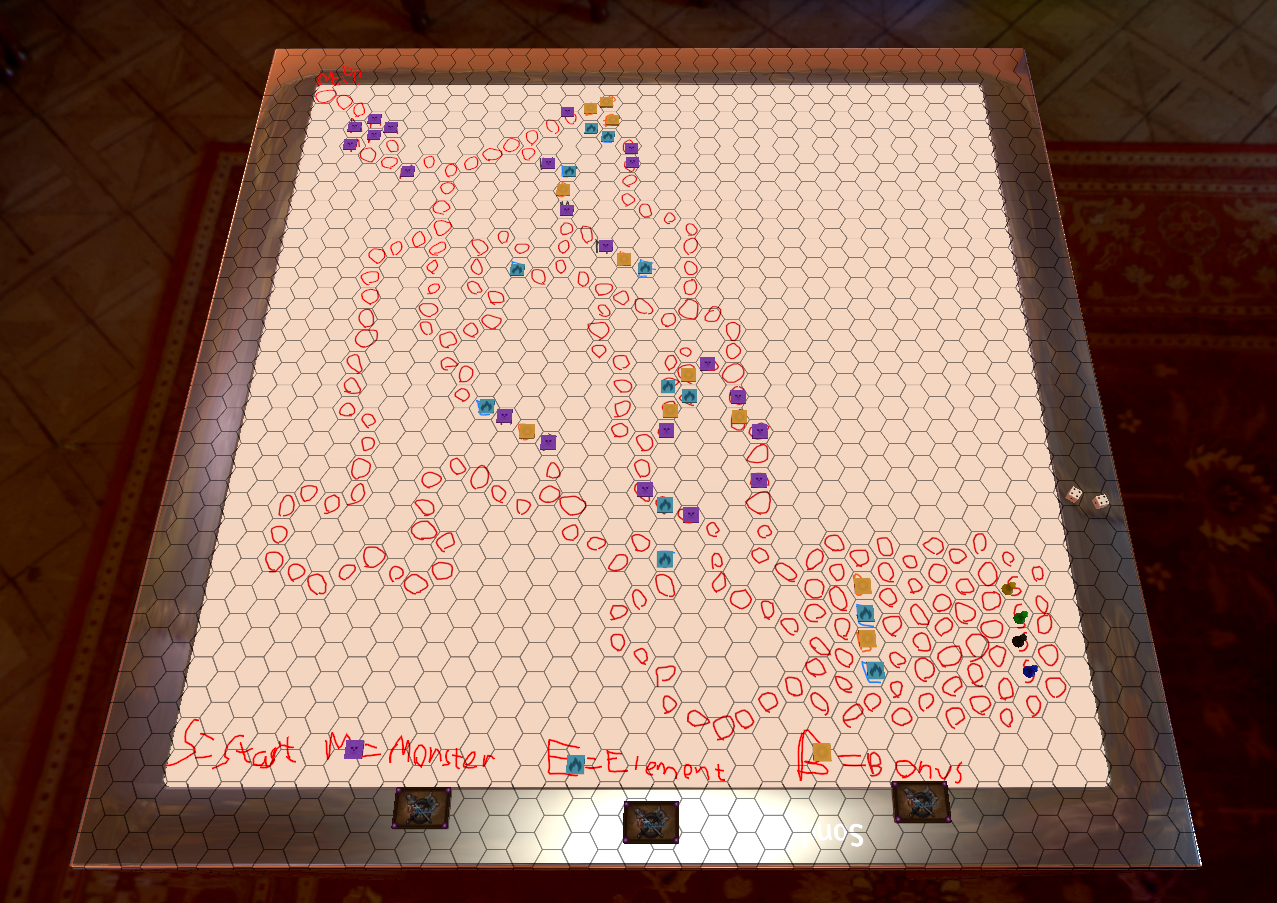