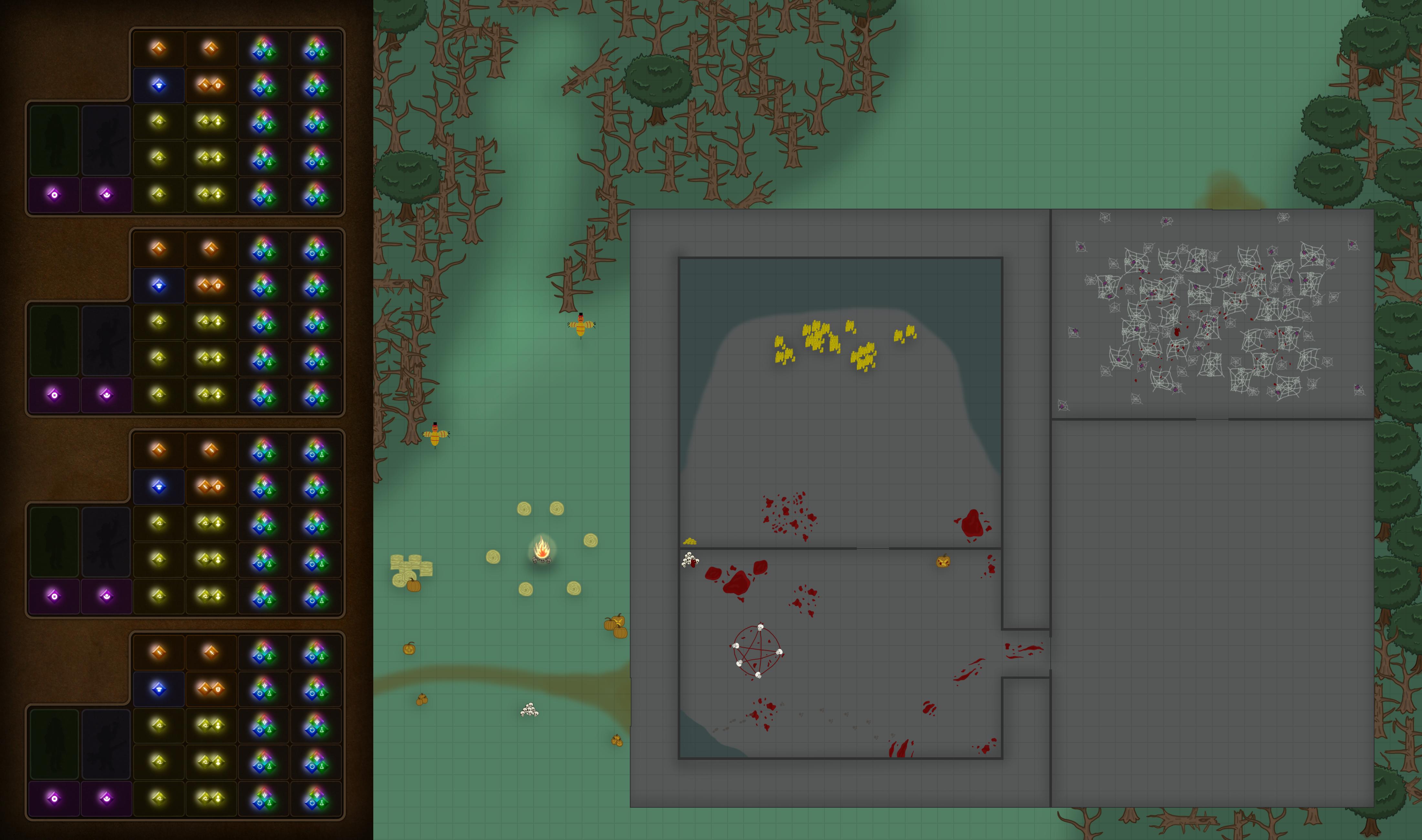 Campaign Overview
Another Halloween themed adventure has the players assuming the roles of some nice and somewhat innocent monsters being manipulated by their boss into setting up a haunted house for this year's Spooktacular event. This campaign is mostly roleplay but there some encounters may be changed slightly to make them into combat ones to achieve an even mix.

This campaign is a continuation of the previous one, Wednesday™, which can be found here.

Character Creation Setup
There are six custom races that I recommend you use for this adventure to bump up the spoopyness. They will be included in the mod for the campaign; otherwise, no other custom setup is required for this campaign.

*The races aren't meant to be balanced well for gameplay, they're meant to just be fun or interesting.

Introduction
“You are all ghoulish creatures who have recently been hired by the demon-queen Faena. Each of you adore your queen for her progressive views, knowing that she too wants peace between the monsters and non-monsters. She has suggested that in order to spark a connection between the two peoples, you will be setting up a haunted house for this year's Spook-Tacular event!”
Encounter 1
The first encounter has our players introducing themselves to their future boss, Faena. Each character was attracted to this job posting because they all want to see peace between monsters and non-monsters. This encounter is entirely the players applying for the job of setting up a haunted house as well as demonstrating their spooky talents, unless they supremely mess up their introduction then they will be given the job. 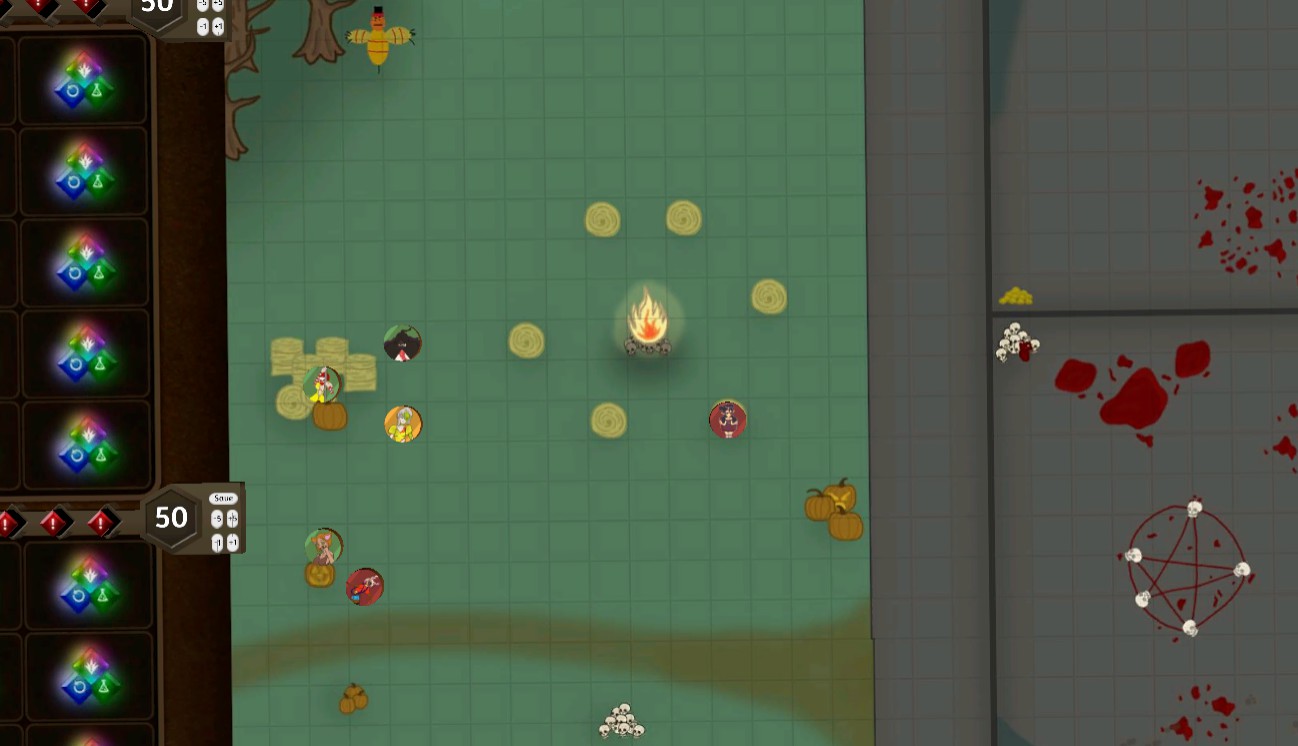 Faena
At first glance, Faena looks to be a cute and shy little girl; when in reality, she is an ancient half-demon who holds enormous power at her fingertips as well as a sinister and plotting mind. She loves to manipulate those weaker than her into doing her bidding and the players are no exception. Her true plans involve using them as a scapegoat while sparking more conflicts between the two factions. She will have them set up a "haunted house" when in reality she has lured in several world famous non monsters in hopes that they will be killed by the twisted contraptions that the players themselves setup.

Random NPCs
A few random NPC's are scattered around the grounds, they can be good improv roleplay opportunities for you to use if you need to extend the first encounter's length.

Encounter 2:
After being hired for the job, Faena guides the players through the behinds the scenes passage of the "haunted house." The walls are enchanted with magic to allow the players to see through into the rooms while anyone in the rooms only sees a stone wall. She will make sure to point out a hidden exit on the north wall that allows them to secretly travel through the haunted house. During the tour Faena will ask the players what kind of scare traps they want to setup for each room, giving them a few suggestions to get their minds on the right track. 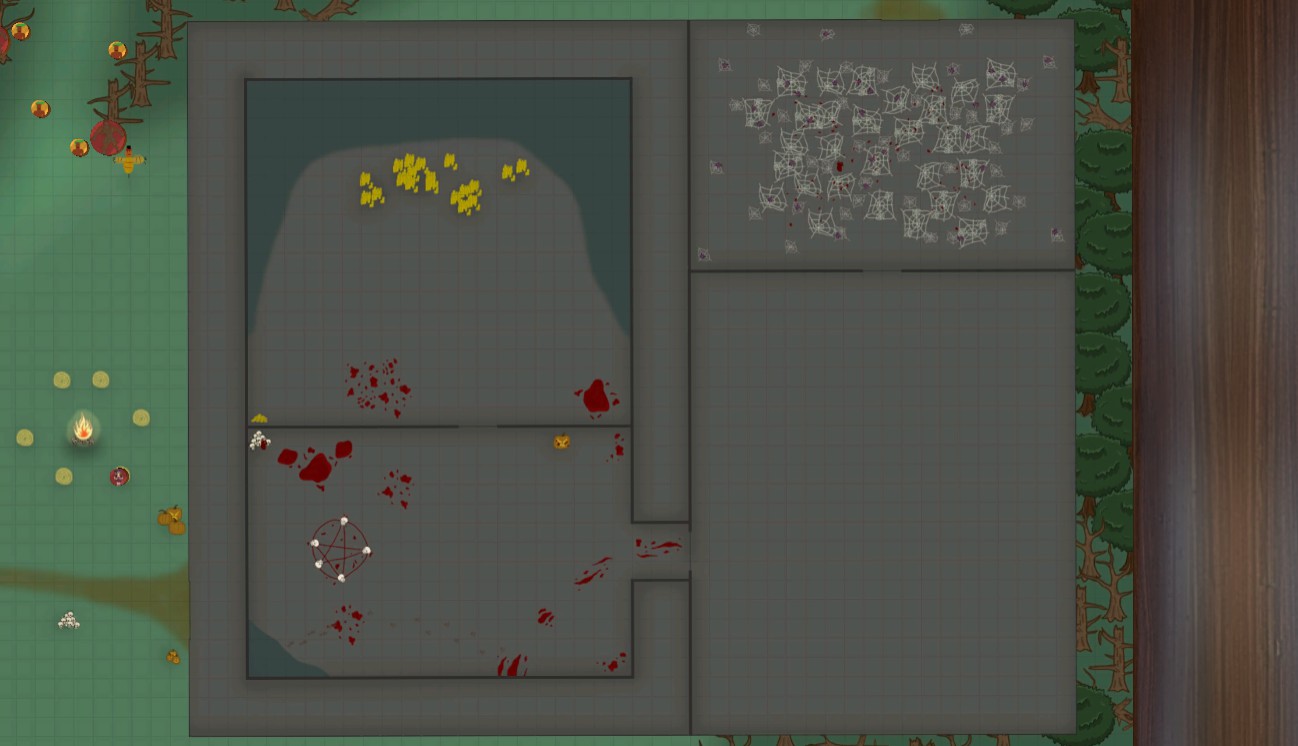 Webbed Room
The first room that guests will enter is filled to the brim with dense spider webbing. Thousands of small, harmless spiders scurry through these webs and will generally avoid anyone that travels through their webs. Faena will suggest to the party that they either have the lights go out when the guests arrive in the room for maximum spookiness as they travel through the webs to reach the door, or that they could put her beloved pet 'Spiderzilla' in the room and have it descend down on them as they arrive. She is somewhat overly insistent that Spiderzilla is very friendly and would never bite anyone.

Empty Room
This empty room still needs a lot of work and its up to the players to come up with what is put here. Faena will tell them that they will need some supplies in order to build everything and that they'll have to make a deal with the local treant gang 'monarchy' in order to secure the wood and other items necessary.

Ritual Room
This room has several things that can be done to make it super spooky. The door to the north is locked and any guests who make it this far will need to find a key hidden in the room to open the door. The players will choose where to hide the key and Faena will suggest that they either have a demon summoned from the pentagram to scare them, or have the muck-monster rise from the water in the corner.

Greed Room
The final room has the prize for the guests who managed to make it this far! It's up to the players to decide if the guests should be punished for taking too much gold form the pile. Faena will suggest that kraken tentacles extend out from the water to frighten the guests or that the gold could come to life as a gold golem to really shock them!

Once the tour is complete, Faena will tell the players that she has some business to attend to and usher them off to deal with gathering the supplies and setting up the rooms.

Encounter 3:
The local monarchy of treants are ruled over by Queen Aspen, a down to earth and respected leader. She and her 'man' Fantismo will allow the players an audience with them regarding the supply issue. After a while Aspen will eventually suggest that she will agree to send them their supplies of lumber, but only if the party can make Fantismo laugh. It will take a lot of effort to achieve this feat, but if the party is creative enough he will eventually relent and laugh like a little girl. 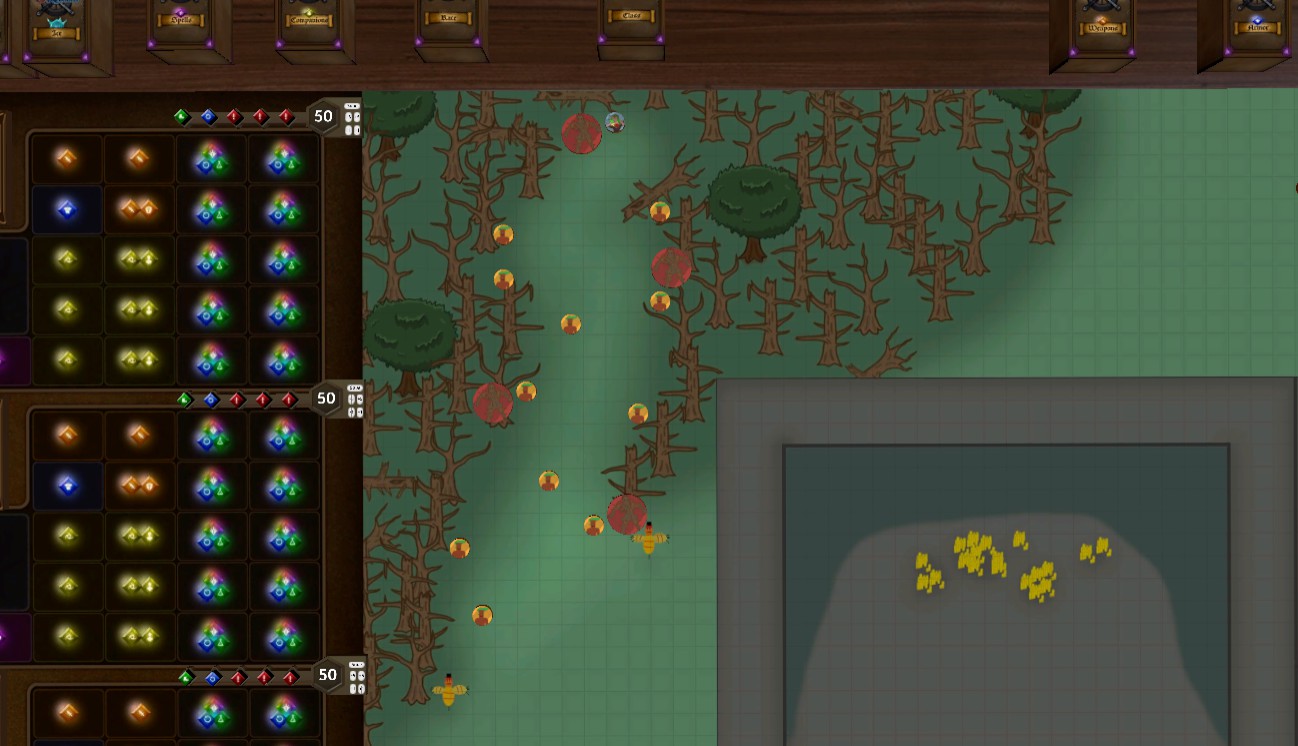 Aspen and Fantismo
Aspen is loved by her fellow treants and monsters alike, she is compassionate and caring, but will also gladly lay down her fury on anyone who betrays her or hits on her man. Fantismo is the quiet type, he rarely speaks and when he does its usually very simple speech. He will do anything to protect his lover Aspen, even if it means risking his own life.
Encounter 4:
A few days pass when Faena gathers the players to announce that the first guests have arrived! This encounter will have the players and Faena watching a cast of characters traveling through the haunted house. Unfortunately for both the players and the guests, the scary traps are far from harmless. The group of guests will eventually finish the haunted house, but each trap will cause permanent damage to one of them, scaring them for life. Exactly what these scars are depends on what your players setup in the previous encounter, a chainsaw wielding maniac who jumps out to scare the guests, for example, might cut off one of the guests arms.

The players might be shocked after the first room turns bloody, but Faena will pressure them into continuing on and even try to convince them to be sympathetic to her cause. If they refuse to cooperate she will threaten to kill the guests instead of just harming them then she may even force the players to take part in this if you as a GM are comfortable improvising. For example, each room could have several levers with different outcomes and its up to the players to decide which is the least bad. Ultimately all or most of these guests should make it to the end alive but with terrible injuries.

The Guests
There are 6 guests who will be roaming these dangerous halls, four of which should be the characters your players made in the previous campaign, "Wednesday" if you ran it with them, if not there are four example characters provided here. In addition to these four, Madam Wednesday herself, and Jessie May.
Laria_Nelk
kon
Portogo_The_Battleswine
Humpty_The_Clown
If you want to make things easy on yourself, just give each of these characters 100 stamina so you don't have to do any math.

Madam Wednesday the Bold!
This brave and beautiful elf is well known all around the world as one of the greatest monster hunters. Wednesday is so famous that there are several brands of action figures, cereals, comic books and many other items that use her likeness to achieve high sales numbers, she is very proud of this and flaunts her celebrity status all the time. She commands a small army of like-minded individuals who want to eradicate the monsters from existence. In combat Wednesday charges right into the thick of the action, attacking at lightning speed. She is unrelenting and merciless to any mindless monsters in her sight.

Stamina: 350
Anytimes: 5
Deathroll: 1
Abilities
Basic Attack: 20 Greatsword (Whenever you take damage you may no-roll basic attack)
whirlwind
charge
secondwind
grindstone (It is assumed this is already active, putting basic attack damage to 40)
Jessie May
Jessie is an adventurous cowgirl who is well known around the world for being one of the very best vampire hunters. She has successfully destroyed several vampire dens on her own using her favorite tool, the holy hand grenade. While her specialty is dealing with large dens of vampires, she also excels at combat in general which drew the attention of Madam Wednesday who offered her a high ranking position in her outfit.

Encounter 5:
Once the guests have dealt with the last room they will be teleported back out into the north side of the haunted house and left in a daze. Faena will be furious with the party that the guests weren't and head to deal with them on her own. She will tell the players that they must help her or else she will destroy them too. From here the party can either join the guests to defeat Faena and her monstrous allies, or join Faena in eradicating the guests to earn her favor. 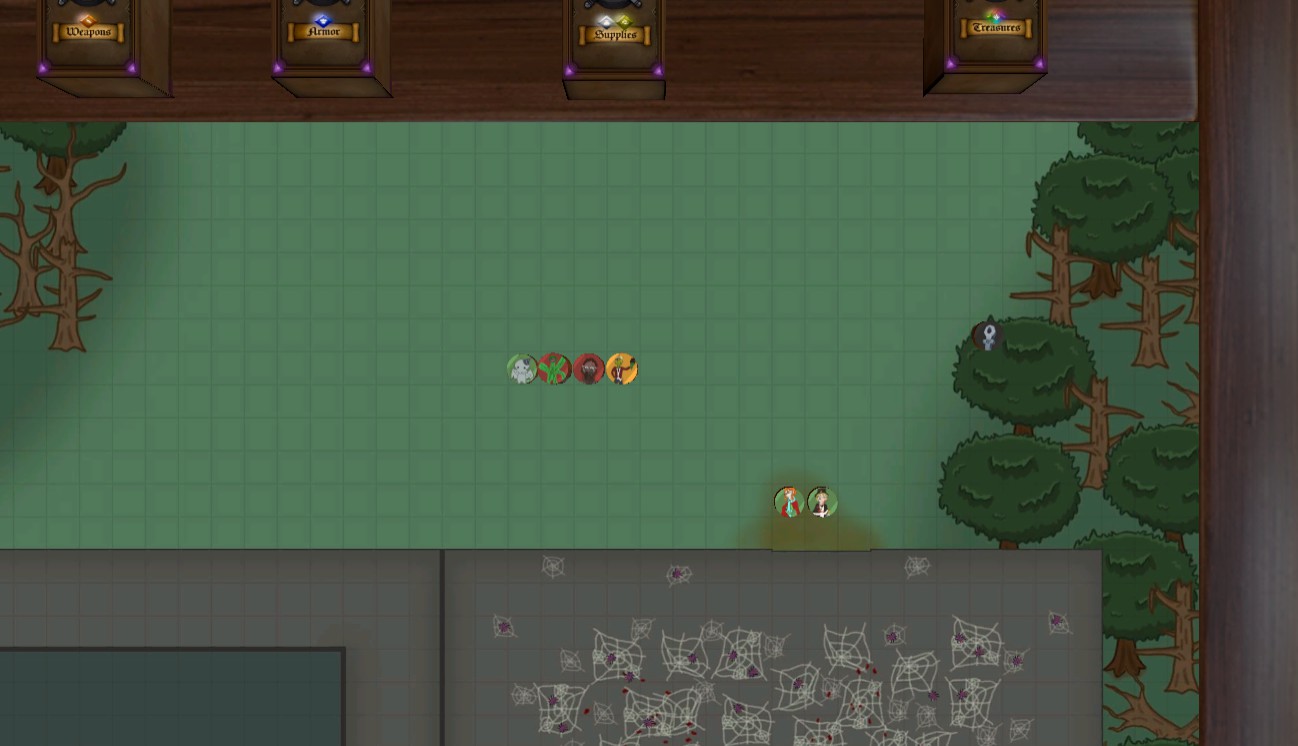 Faena
In battle, she takes on her true half-demon form, growing wings, claws, and monstrously long fangs. Faena will not enter this combat alone, she will let out a terrifying wail at the start of combat which will summon a monstrous hoard to aid her in battle. At the start of the second round 3-5 hoard monsters will enter combat and each subsequent round will add 2-3 more each time, they will continue coming until she either surrenders or dies.

Zombie
Zombies make up the bulk of the mindless monsters. They are easy to temporarily put down but they become more deadly each time they get back up.

Hair Monster
The hair monster is a common creature within the mindless hoards. They are very nimble and attack their prey relentlessly.

CuteThulu
The famed Cutethulu is a rare battle-mage among the monster hoards. They are both deathly spellcasters from range, and excellent support casters for their allies.

Mutant
These mutated dwarves are very common monsters among the hoard. They each are capable of wielding 4 different weapons at a time thanks to their two extra arms protruding from their bodies.

Stamina: 75
Anytimes: 1
Deathroll: 5 (dies when reduced to 0 stamina)
Abilities
Basic Attack: 5 Broken Swords
custom card
Conclusion
If the party helped Faena, then she will reward them with their paychecks and send them on their way, hoping that she can still somehow spin this whole situation so that they will take the blame. If the party helped the guests; however, they will be thankful and agree to go their separate ways. Either way, tensions between the two factions will rise from these events.

Credits
This campaign falls under the CC BY 4.0 License and can be used and edited freely as long as you provide credit!
Art style of the maps were inspired by the standard Urealms style of Meganzoor.