The Many Realms custom campaign (Realm of Holding campaign) 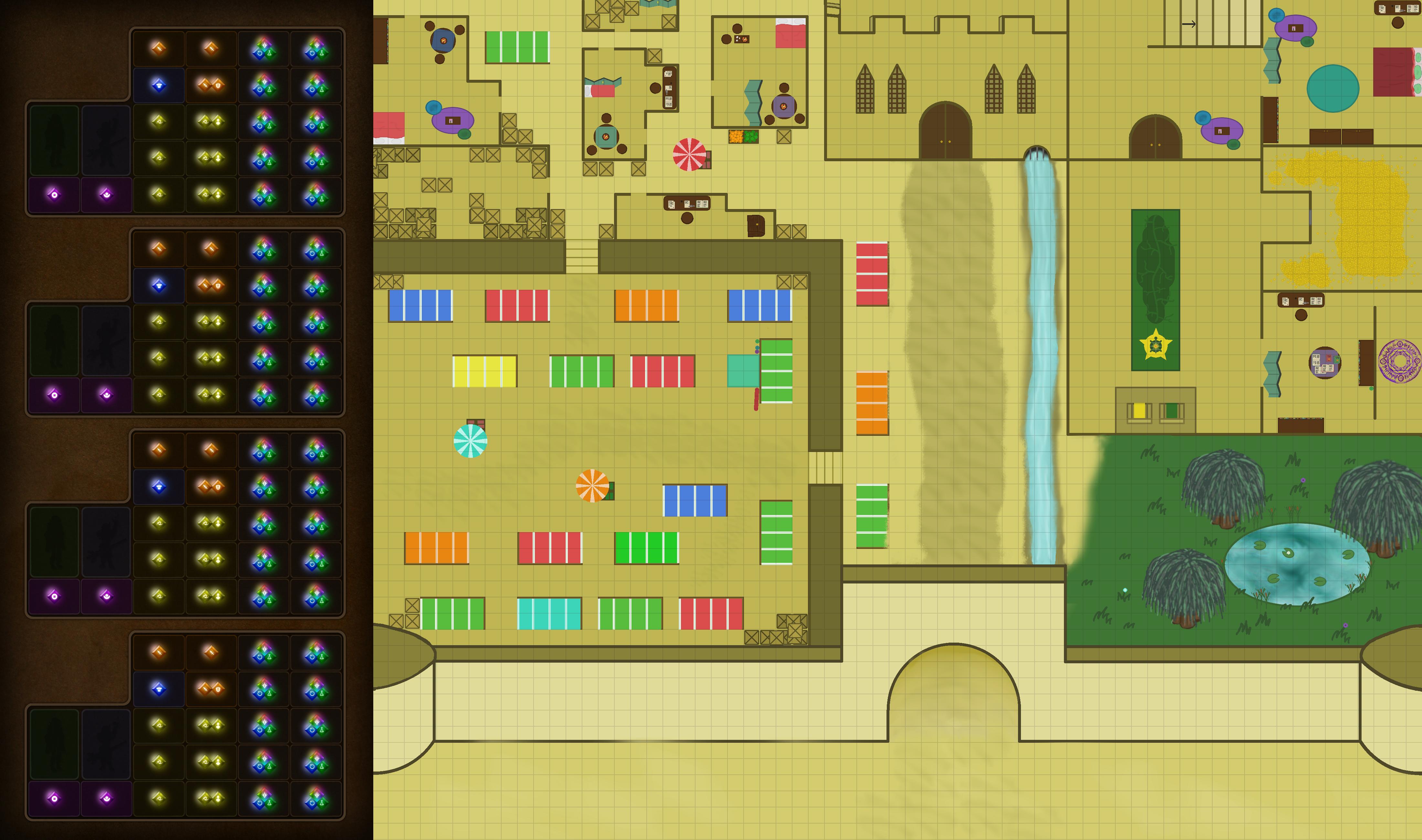 Hello again my friends, it is time for another campaign of mine! Hope you enjoy

Introduction
You are all part of, or were hired by, the Guild of Explorers. Your mission is to investigate the disappearance of Jameson "Jimmy" Blant after suspicions arose due to Duke Daring and him being in the same location when he disappeared, as well as Duke denying that he saw Jimmy. Several years after the disappearance, a messenger boy was sent to the location and came back with news that Jimmy has been stuck in the Realm of Holding all this time.

Character Creation Setup
Doesn't really matter how you set up the character creation, any classes and races work.
I might suggest some more magical oriented classes, as the party either needs a way to merge Realm of Holding bubbles or get a companion with magical abilities. (Only magic can pass through bubbles).

The city
The desert city of Korangar is a merchant city in the northwest of the Barenzaero desert. It accepts many different races and people within its walls.

There are many possible roleplay encounters within the city walls. I will list a few ideas here.

Main road:
Market:
Residential Area:
However long the party spends doing random things in the city is up to the GM and the party. Eventually they will be escorted to the castle to talk to the royal wizard. 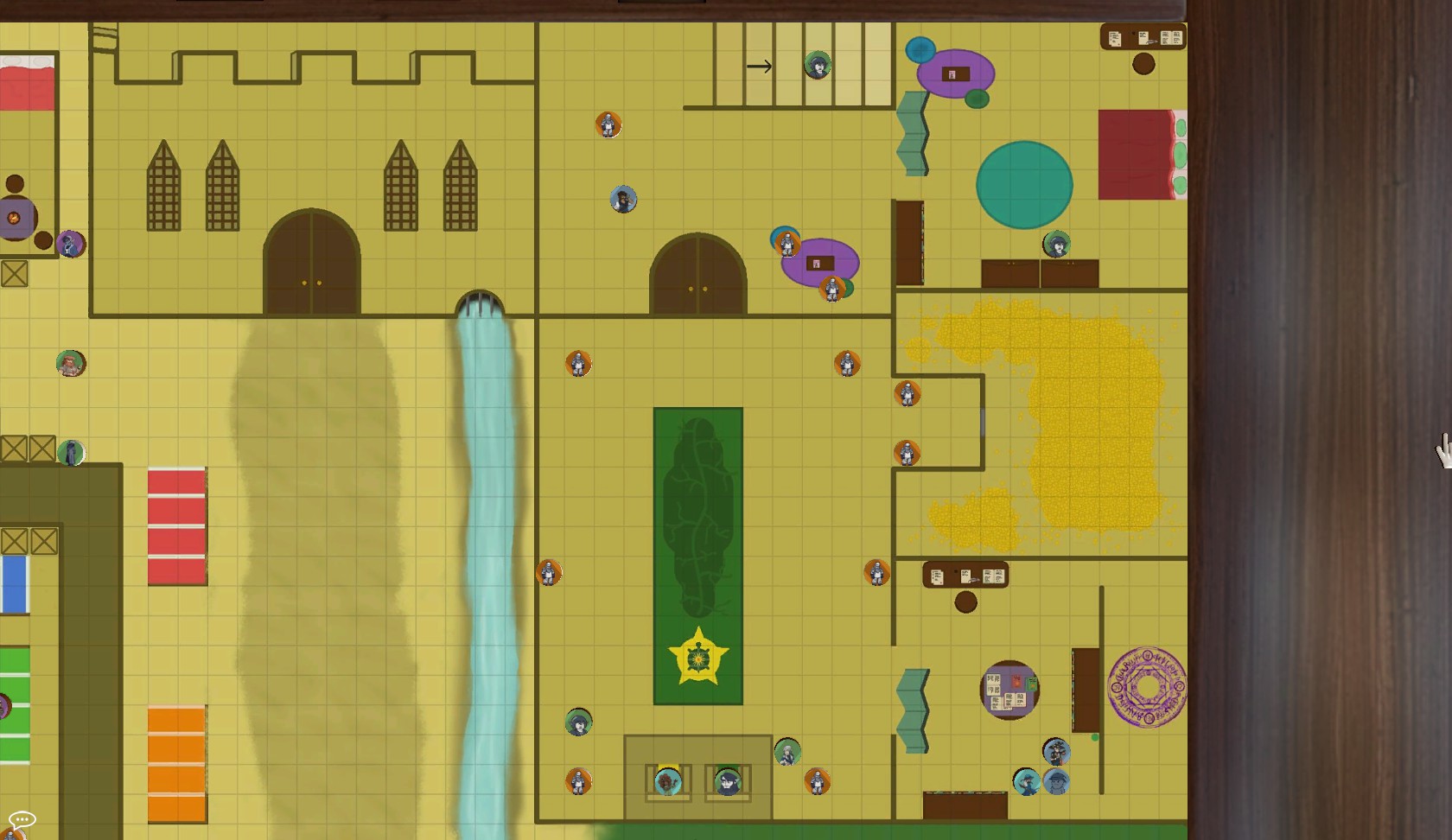 The castle consists of 6 rooms: The lobby/welcome room, the royals bedroom, the vault, the throne room, the royal wizard's room and then the upstairs section (not shown, but stairs are offered. I imagine it as the other various rooms in a castle, like a kitchen and a few bedrooms, and a nice balcony over the park just south of the castle).
The throne room contains the royals sitting in their thrones
The welcome room contains a few guards hanging out and one of the royal's stewards/assistants
The royal bedroom contains a jimmy servant
The vault, of course, contains gold
Finally, the royal wizards room has a lot of books scattered about, a carpet in the corner (yes, THE carpet) and a ritual circle in the back

Many possible things can happen in the castle, like the city. Eventually the party may find themselves talking to the royal wizard, which who will then explain plans for getting the party in and out of the Realm of Holding.

He will explain that the bubble that Jimmy occupies is too big to pull through the carpet and that they need to separate Jimmy into another bubble to get pulled out. He will explain that magic or large amounts of force is necessary to merge or separate bubbles. The wizard will lead the party into the Realm of Holding and we go to map 2

The Realm of Holding 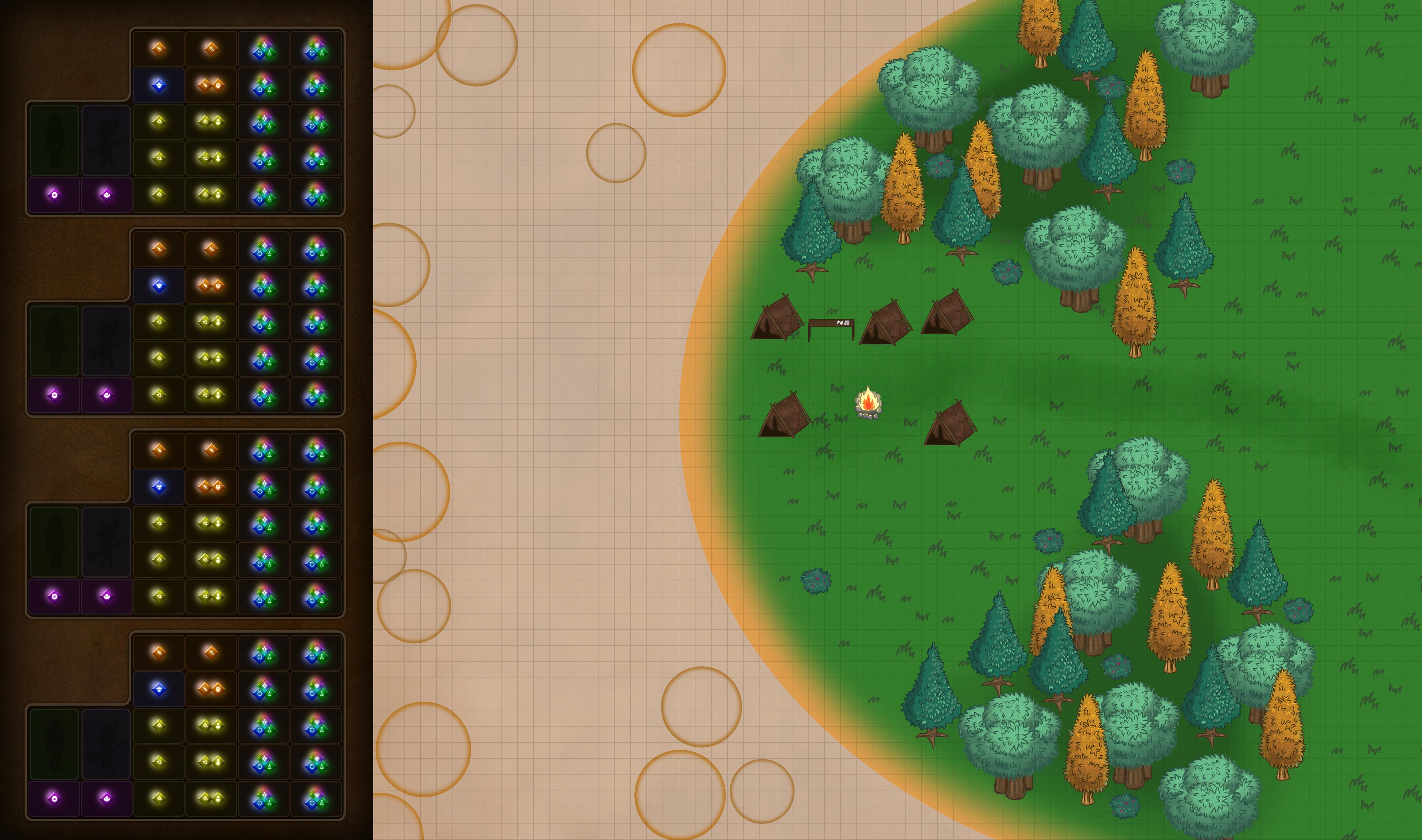 The party will start out in a bubble, possibly in separate bubbles. The party will need to merge bubbles to move into the big bubble. There should be other bubbles with either enemies, items, creatures and other things, which the party can merge into to interact with the contained entities. Use the TTS tools to draw circles and place the party within them. The reason they don't have their own bubbles on the map is because eventually the bubbles will be merged which is better shown with lives drawings.

Once the party reaches the large bubble and joins with it, they will be met with a small encampment with people taking care of wounded people, in the distance, past the trees, a small wooden fort can be seen.

The party may talk and go wherever they like around the camp, though I suggest Jimmy approaching the party and welcoming them to his own little pocket of the Realm of Holding.

Encounter 1 (No way out of this one) 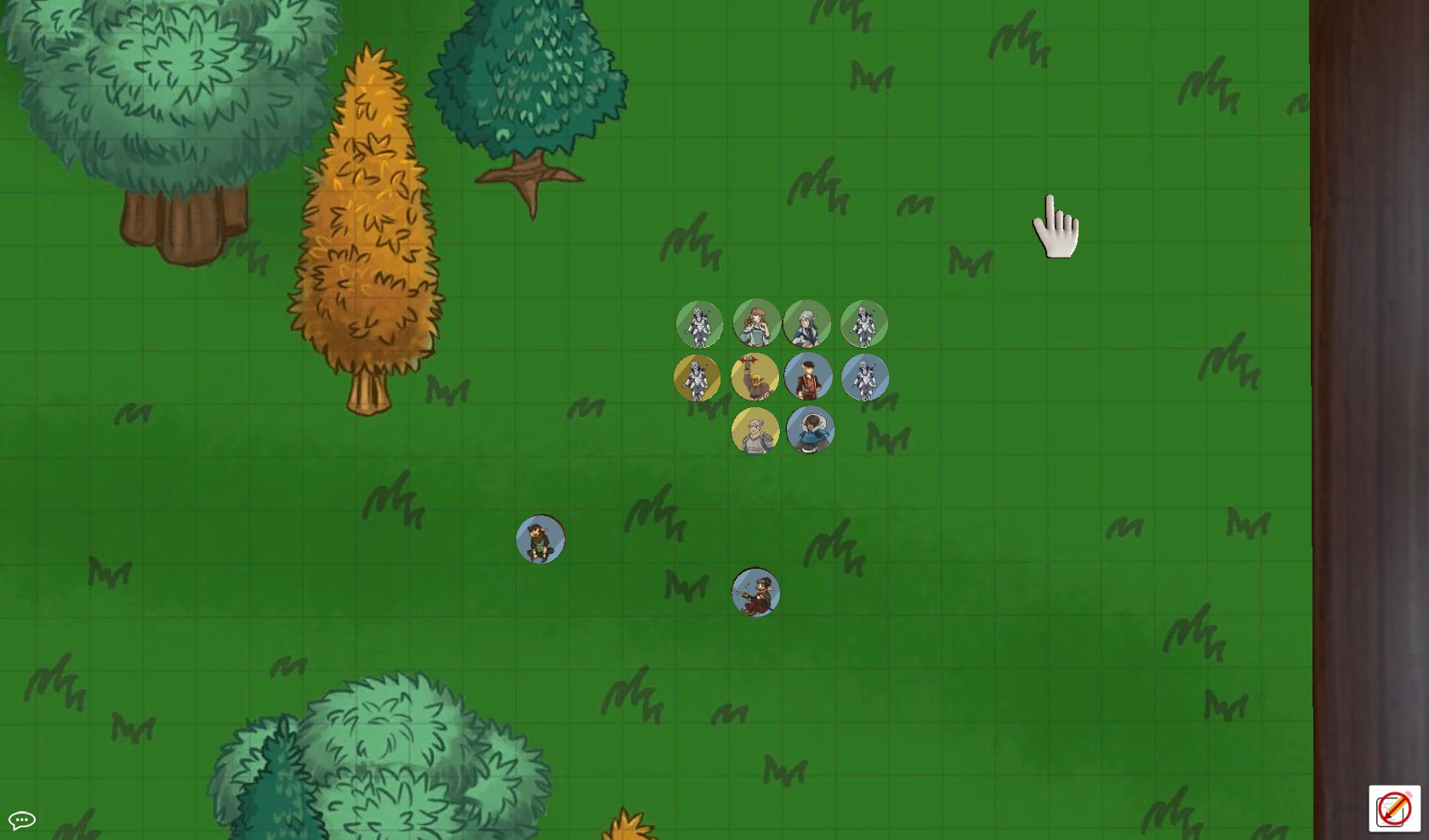 If the party tries to approach the town (past the trees on the right), some people will teleport in and intervene, speaking to Jimmy that he's not welcome here anymore, to which he will reply either that he wishes to stay, or he can't get out, depending on the conversations earlier or whatever the GM feels is best for the story. These people claim to be members of the Order Iterum, the organization that controls the Realm of Holding to some extent. They will explain that such a large bubble is creating instabilities in the Realm and needs to be dismantled immediately. They party may engage with the Order, if so, here are the characters:

Stamina: 200
Anytimes: 3
Deathrolls: 3
lirundablade (Goto action)
sunbolt (Alternative goto action)
holylight (will try to heal his son or wife if they get low)
markofwalling (if things go bad he will use this)

Benson Stormstick (Galen tile, Jason's son)
Benson was born in the Realm of Holding and has been following in his father's footsteps his whole life. He manages to find time to read quite often and has a intrigued disgust for arcane magic.

Stamina: 100
Anytimes: 3
Deathrolls: 1
warhammer (Not used too often)
purify (General goto action)
honorchains (When someone is trying to kill him)
blessingofstrength (Use when the fight starts)

Emily Summerford (Female elf tile, Jason's wife)
When Emily was thrown into the Realm of Holding after an altercation that she doesn't remember, she was saved by Jason and he took her as his wife. She does remember that she quite enjoyed water magics and is fascinated by the Realm of Holding. 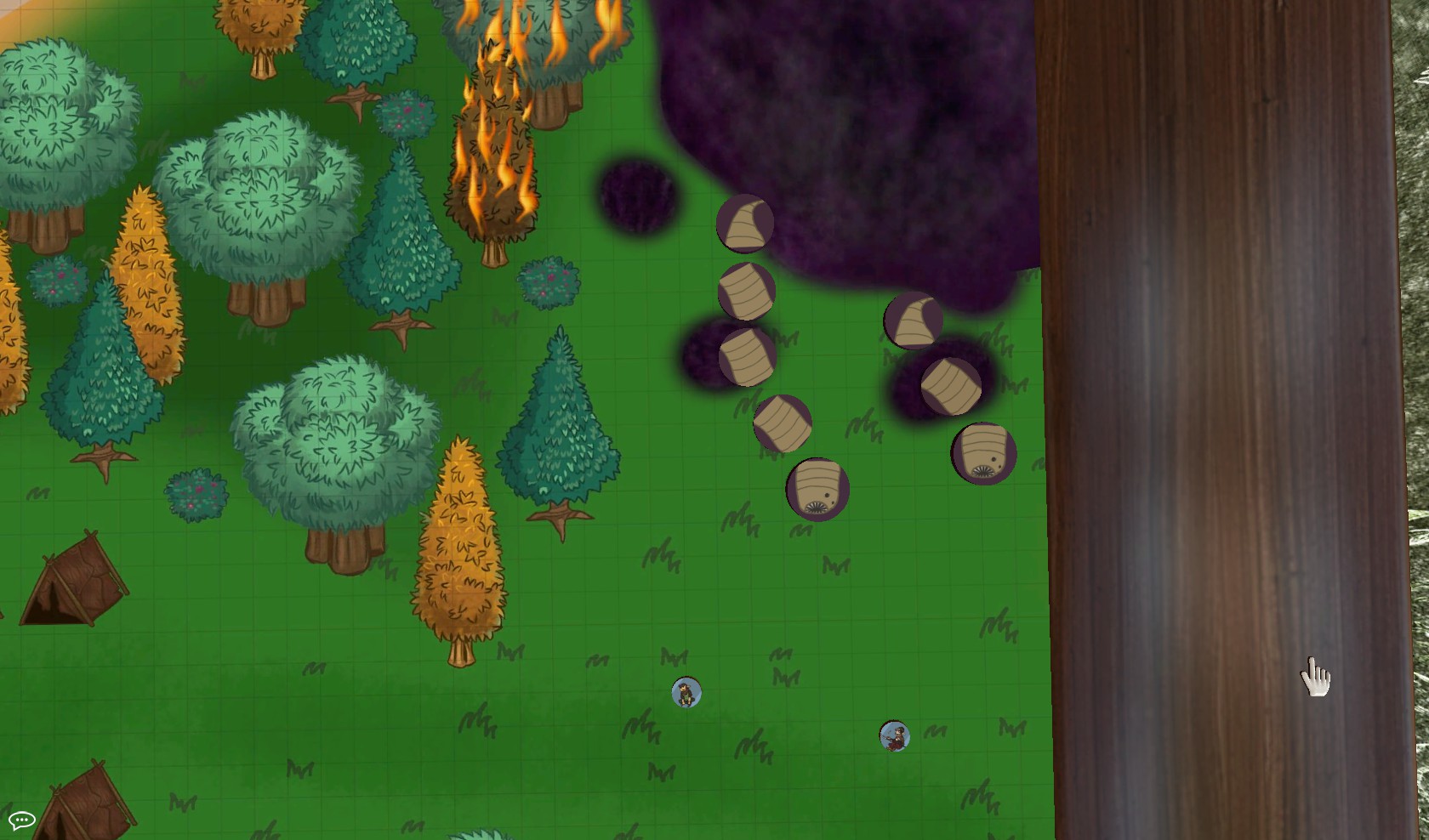 Suddenly (whenever the GM feels like it) an arcane explosion will go off and out pops 2 worms! Oh no!

Void Worm (Head):
Stamina: 250
Regular Actions: 1/2 per tile, rounded up (applies for all worm tiles)
Anytime Actions: 2 per tile (applies for all worm tiles)
Abilities:
Bite/swallow (25-50 damage, general goto)
custom card (should always have one of these down)
Burrow (go underground and reappear anywhere, dealing 25 damage upon sprouting up and creating rough terrain, general interrupt action)

Void Worm (Tail):
Stamina: 150
Abilities:
arcanebeam (will use if given a good opportunity to deal damage)
lotusblast (general goto action)

If the party manages to defeat the worm, Jimmy will thank them and either ask them to help in the rebuilding process (if Jimmy wants to stay) or ask them to take him home, along with his friends. Generally this is where the campaign would end, if the GM feels it necessary to continue, please do so.

Anyways thats it for me, hope you enjoyed reading/playing this campaign

All assets were found in this imgur album collected by @Spacewalker on his post here. Most of them were made by @Meganzoor ;

(The assets were the trees, campfire, ritual circle and tents)