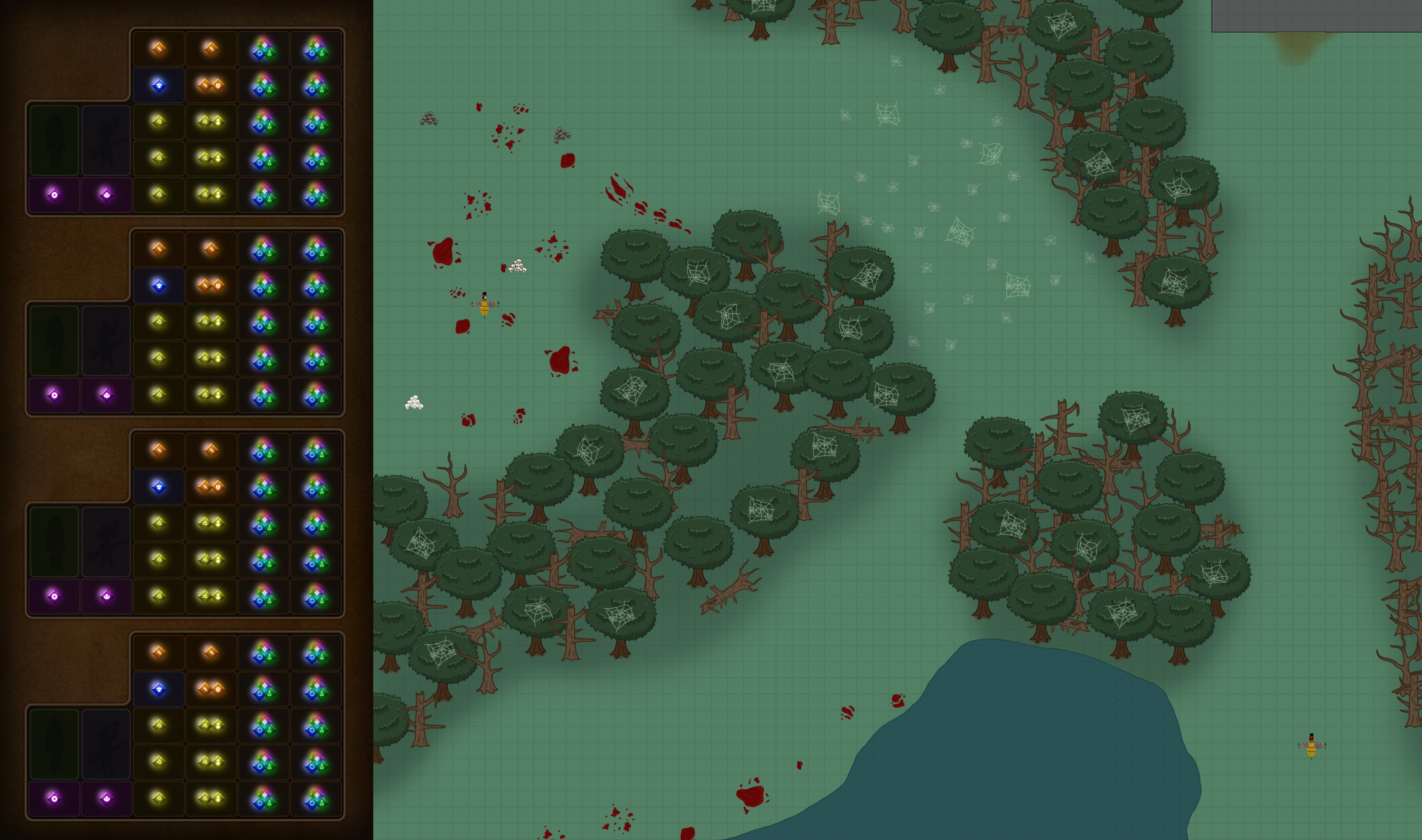 Campaign Overview
This Halloween themed adventure will have our group of players joining the famous anti-monster commander, Madam Wednesday The Bold, on a crusade to wipe out a nearby haven of monsters. This campaign has an even split of combat and roleplay, with only a few opportunities of a player death.
Character Creation Setup
No custom setup is required and you can use random decks to fill the shop.
Introduction
“Four new recruits find themselves caught in a deadly ambush of devils, beasts, and other hideous creatures. They barely survive this encounter and are swept down a river, becoming isolated from their comrades. After a few minutes they regain their composure enough to decide that there is only one thing left to do. Deep behind enemy lines there is little hope for survival, they must complete their original goal of destroying the monster haven. ”
Encounter 1
The first encounter has our players crawling to shore from the nearby river. They are bloodied and tired from a long battle, but know that they must press on ahead. After taking a moment to collect themselves, two little girls come strolling up to the party hand in hand. The girls introduce themselves as Monny and Fae, they will then offer to cheer the group up since they look so dreadfully depressed and full of sorrow. They will constantly demean the party and offer conflicting advice all the while their sinister nature seeps into their normal conversation. Fae will encourage the party to seek out the 'Trial of Compassion,' which is the giant pyramid nearby and the only way to reach the haven. 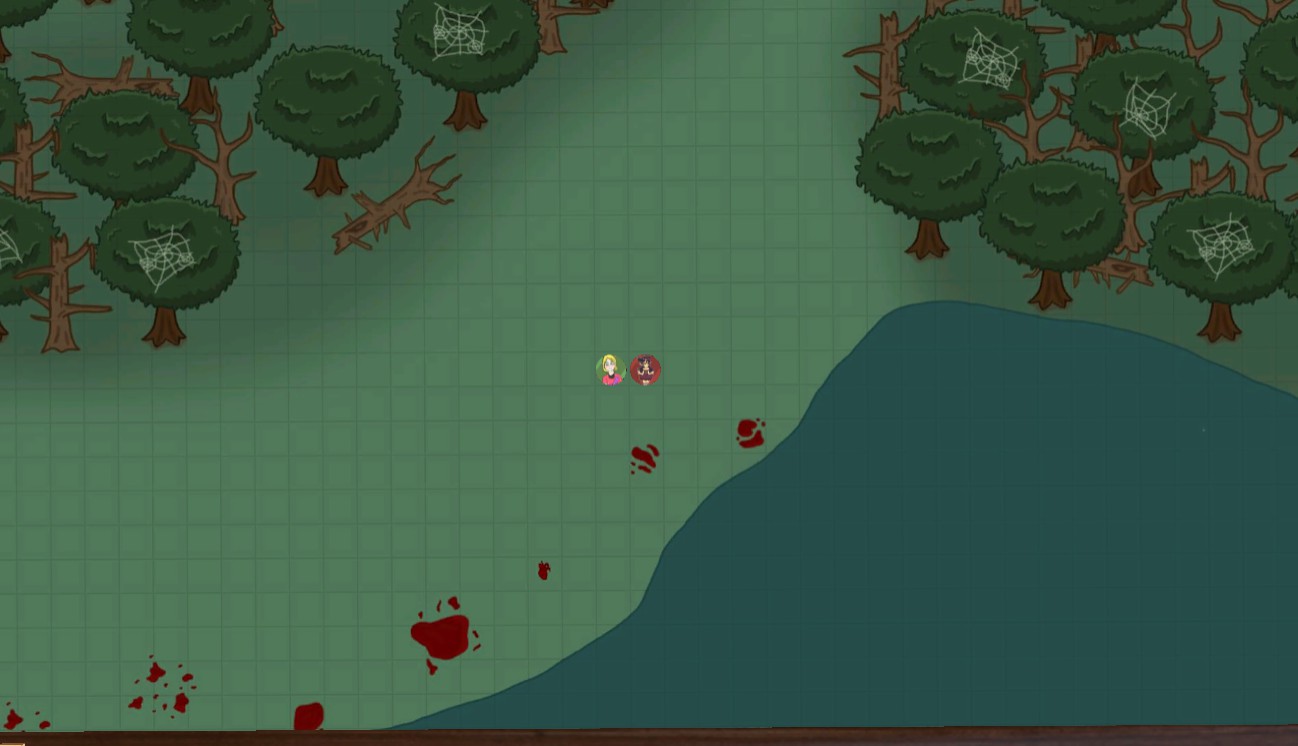 Monday and Faena
These half-demon sisters are secretly plotting to spark war between people and the monsters. Faena is the leader of this secret organization and works in the shadows, manipulating everyone around her into doing her bidding. Monday less restrained than her sister and also less powerful, while she has the blood of a demon flowing within her veins, she lacks the full control that Faena has. It should also be noted that Monday is the long lost daughter of Madam Wednesday the Bold. They will not fight the party in this encounter, if they are attacked they will simply flee from them.

The next three encounters are non linear at this point, the players may decide to explore left before going to the trials door for example, but this shouldn't matter in the long run.

Encounter 2:
Two skeletal men guard the entrance to the trial grounds. They are very friendly to the party and are both protected by a magical barrier, along with the gate itself. They are more than happy to cooperate, sharing with the group that they must deactivate two Leystones nearby in order to bring the barrier down. Once they do this they would be free to enter the trial grounds to prove themselves worthy of entering the haven. 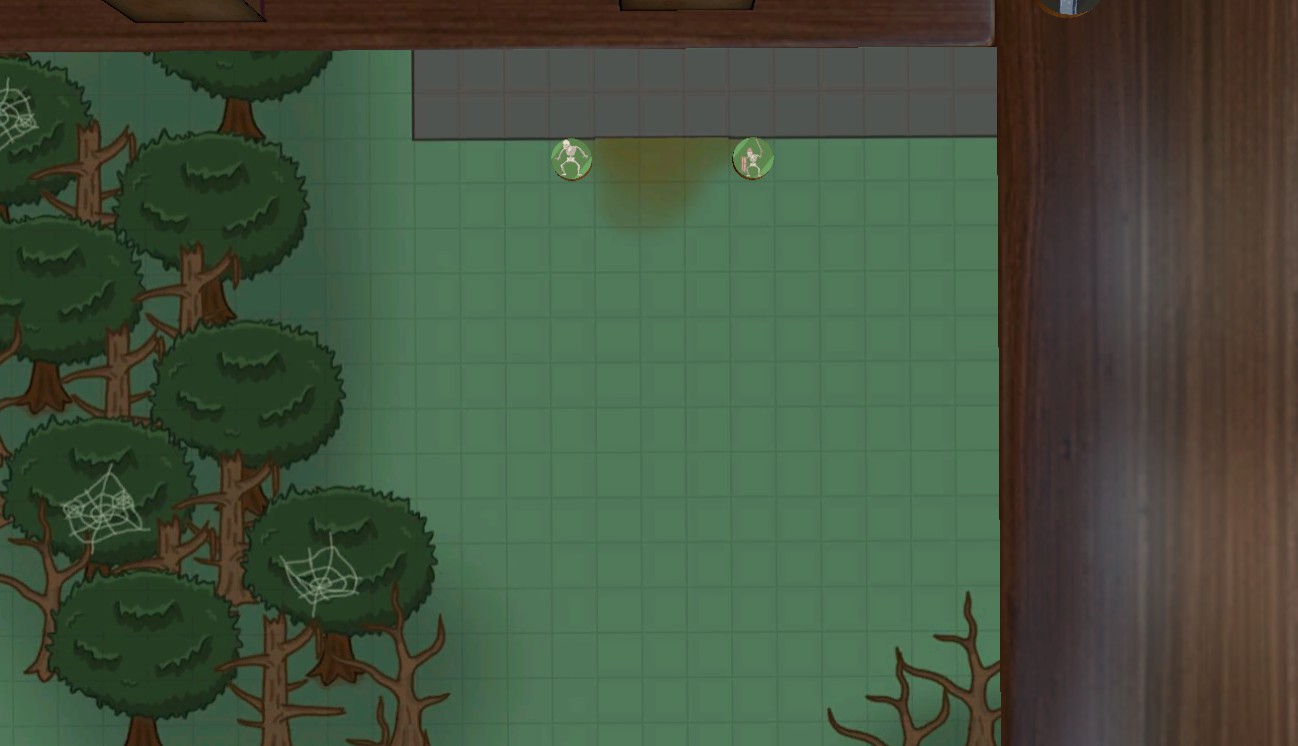 These two skeletons are named Ned and Fred, they are a wacky duo who both enjoy living life to its fullest. Ned's favorite pastime is using his shield as a sled down the icy fields of his homeland, while Fred enjoys pole vaulting himself into ridiculous and often, precarious positions, using his trusty pencil!
Encounter 3:
The left Leystone is guarded by a hoard of mindless monsters, similar to the ones who ambushed the Wednesday's outfit before. As the party begins to approach the stone, the monsters will likely take notice and begin hissing/growling/yelling at the players while assuming a defensive stance around the Leystone. At this point Madam Wednesday will emerge from some nearby bushes with one of her subordinates, scolding the party for breaker her stealthy approach. The only way forward at this point would be to fight this hoard of beasts and destroy the Leystone. (This stone is in the eye socket of the scarecrow) 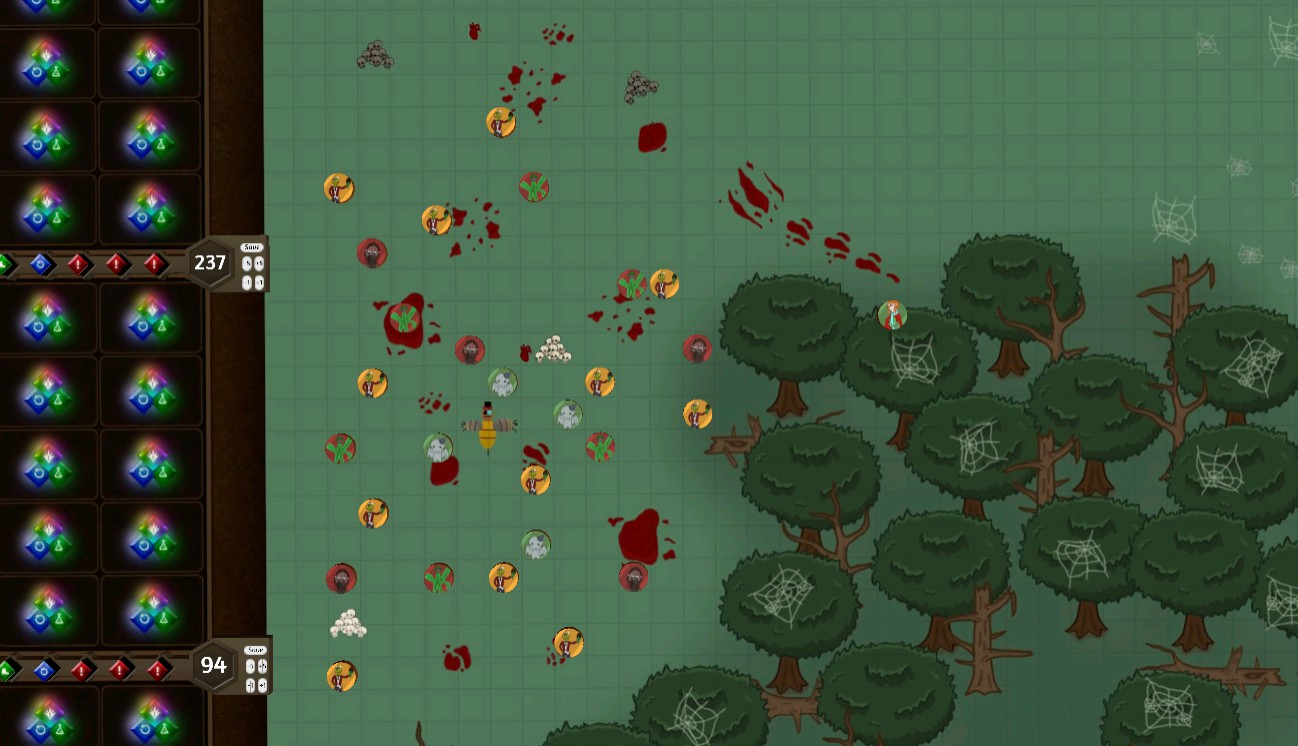 Several bodies lay around the hoard, these were one sane monsters who were killed defending the stone from the hoard. Once the Leystone is destroyed, Wednesday will offer to join the party in assaulting the haven and that she will meet them at the gates once she has gathered a few surviving members of her army.

Madam Wednesday the Bold!
This brave and beautiful elf is well known all around the world as one of the greatest monster hunters. Wednesday is so famous that there are several brands of action figures, cereals, comic books and many other items that use her likeness to achieve high sales numbers, she is very proud of this and flaunts her celebrity status all the time. She commands a small army of like-minded individuals who want to eradicate the monsters from existence. In combat Wednesday charges right into the thick of the action, attacking at lightning speed. She is unrelenting and merciless to any mindless monsters in her sight.

Zombie
Zombies make up the bulk of the mindless monsters. They are easy to temporarily put down but they become more deadly each time they get back up.

Hair Monster
The hair monster is a common creature within the mindless hoards. They are very nimble and attack their prey relentlessly.

CuteThulu
The famed Cutethulu is a rare battle-mage among the monster hoards. They are both deathly spellcasters from range, and excellent support casters for their allies.

Mutant
These mutated dwarves are very common monsters among the hoard. They each are capable of wielding 4 different weapons at a time thanks to their two extra arms protruding from their bodies.

Encounter 4:
The right Leystone is a tricky one. The players will stumble upon a on of their allies, Jessie May, holding a wooden stake to an old mans chest. May screams in a southern accent demanding that this bastard vampire tell her what happened to her friends. The vampire had nothing to do with the ambush, but she won't believe him. The Leystone in this area is missing from its podium and has been swallowed by DJ Count. He will gladly offer the stone to the party if they help get their crazy friend off of him. 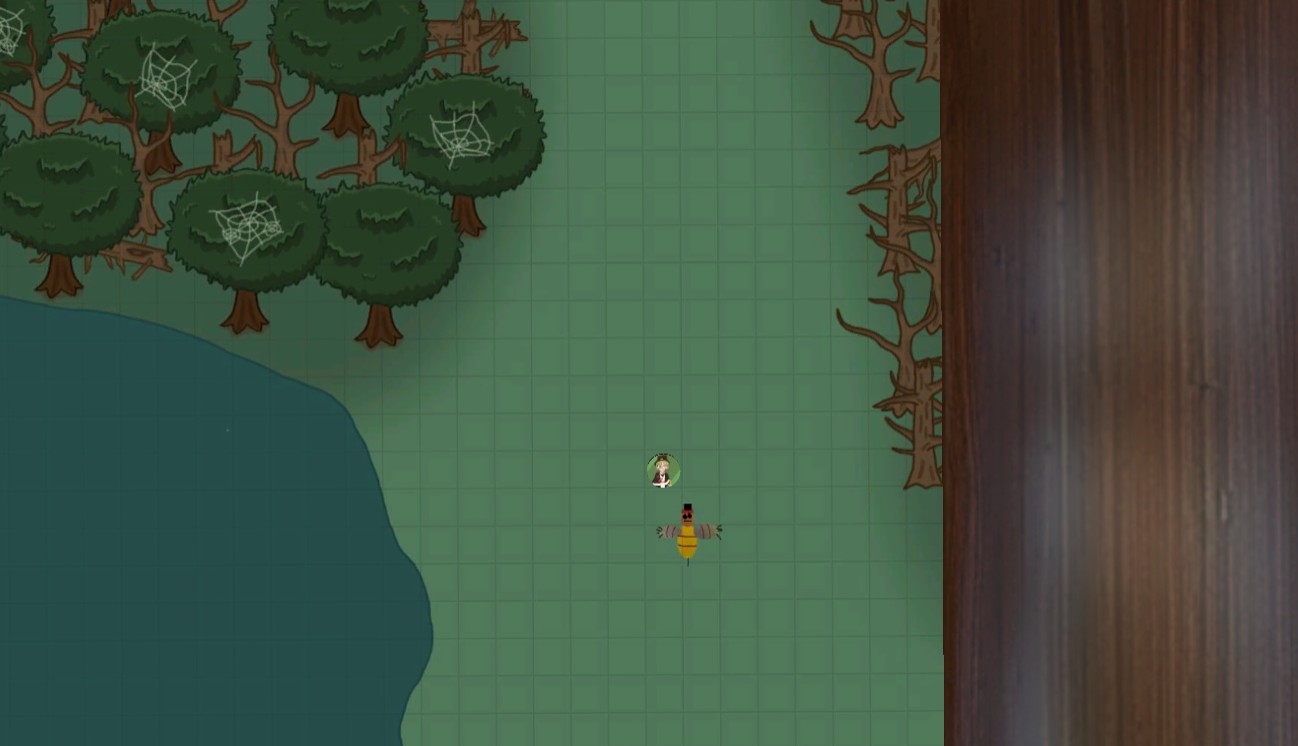 DJ Count
DJ Count is super hip, and 'with the times' even though he is several centuries old. He just released his latest mix-tape and is super stoked about dropping this hot fire, often saying its so lit that your fam will be in danger of second hand burns. When playing his mix-tape Count will often get overexcited and beat-box along with his tunes, often to the dismay of the younger generations. DJ is not a proficient fighter but is extremely durable thanks to his vampirism. The only way to kill the count is to drive a silvered stake into his heart.

Jessie May
Jessie is an adventurous cowgirl who is well known around the world for being one of the very best vampire hunters. She has successfully destroyed several vampire dens on her own using her favorite tool, the holy hand grenade. While her specialty is dealing with large dens of vampires, she also excels at combat in general which drew the attention of Madam Wednesday who offered her a high ranking position in her outfit.

After dealing with this Leystone, Jessie May or may not tag along with the party depending on how they treated her and whose side they picked.

Encounter 5:
With both Leystones destroyed or deactivated, the barrier warding the trial's gate will go down. When the party returns they will find piles of bones where Fred and Ned were once standing and several new figures guarding over the gate. A hulking hunky man stands in the center of a small group of various monsters with Monday clutching his leg. The man tells the party they are too weak to survive the trails and that they should turn back now while they still live. Monday begs Damien to let the players enter but he is giving her no ground and will eventually attack the party if they linger too long. 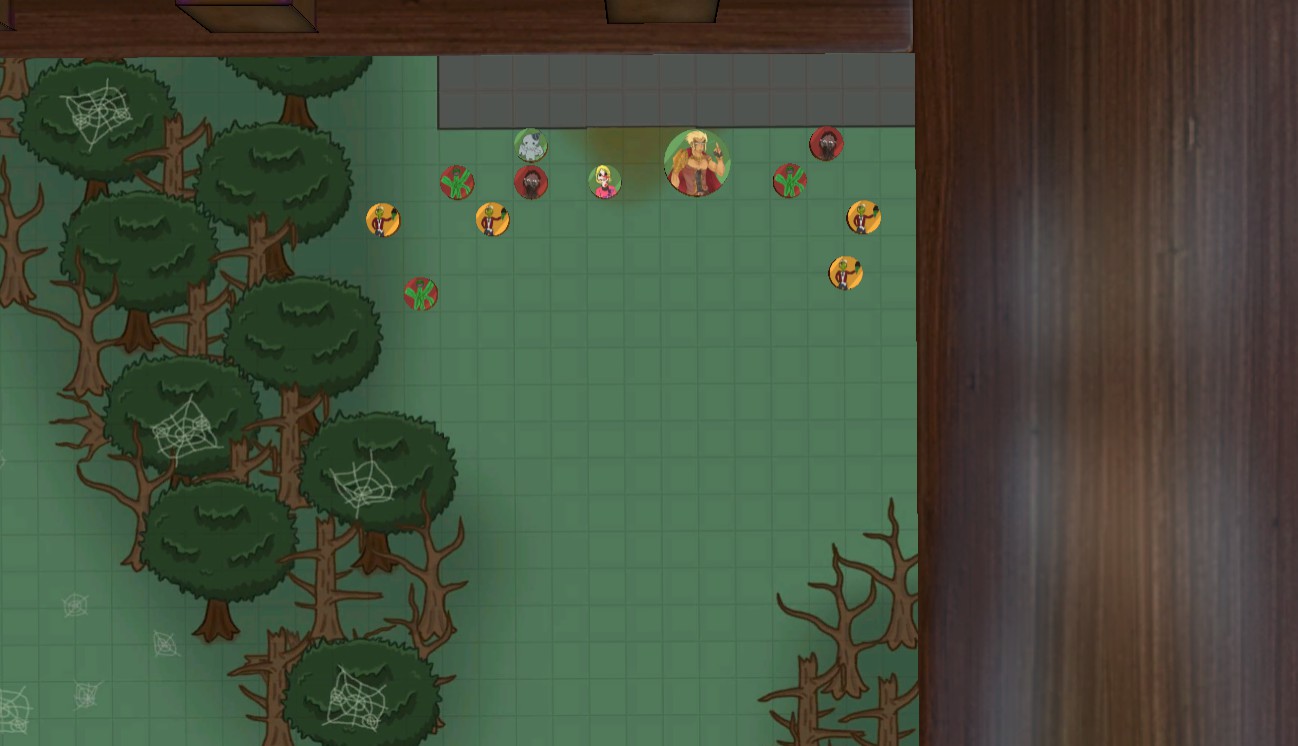 Monday
On her own, Monday is not a threat to the players but she makes for an excellent support element for her big brother Damien. While she may object to him believing the players are not strong enough to spark the war, she will eventually relent and respect his decision and help him in battle.

Stamina: 100
Anytimes: 3
Deathroll: 1 (dies after reduced to 0 stamina)
Abilities
Basic Attack: 5  bloody dagger
redsparkheal (use only to full heal either damien or monday when they are near death)
drainblood (general goto action)
pooldrifter

Damien
Damien is a very large half-demon and older brother to Monday and Faena. While he has the strength of a demon, much like his sister Monday, he cannot fully control his demonic powers. He is a very stubborn and intelligent man and is a deadly combatant when faced on the battlefield.

Stamina: 350
Anytimes: 3
Deathroll: 1 (dies after reduced to 0 stamina)
Abilities
Basic Attack: 30 Demon Hammers (general goto action)
siffiransilverhammer
thunderousroar (this combos well with the hammer to heal himself each time he basic attacks)
slamshock (ruin someones day with this)
Conclusion
With Damien and Monday defeated, the party is free to enter the trial grounds and face the horrifying threats that lurk within.

This campaign is the first part in a two part story. The second half can be found here which has our players assuming the role of the monsters.

Credits
This campaign falls under the CC BY 4.0 License and can be used and edited freely as long as you provide credit!
Art style of the maps were inspired by the standard Urealms style of Meganzoor.