31
Kadriaz
September 2017 in Custom Cards, and Assets
This is my Class Legion. Is an High Damage and High Stamina Tanking Class. However to balance both a DPS and a Tank in the same class, the only way for the Character to achieve the power is to be constantly Burning, which prevents the Character to use multiple abilities in one round, use other class Anytimes or dodge incoming attacks. 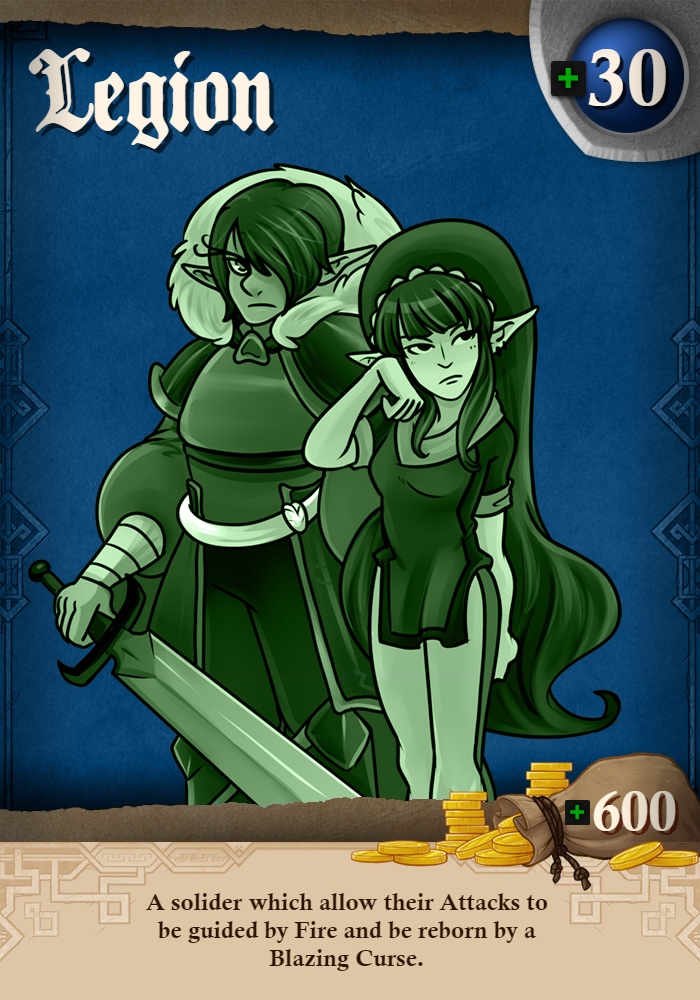 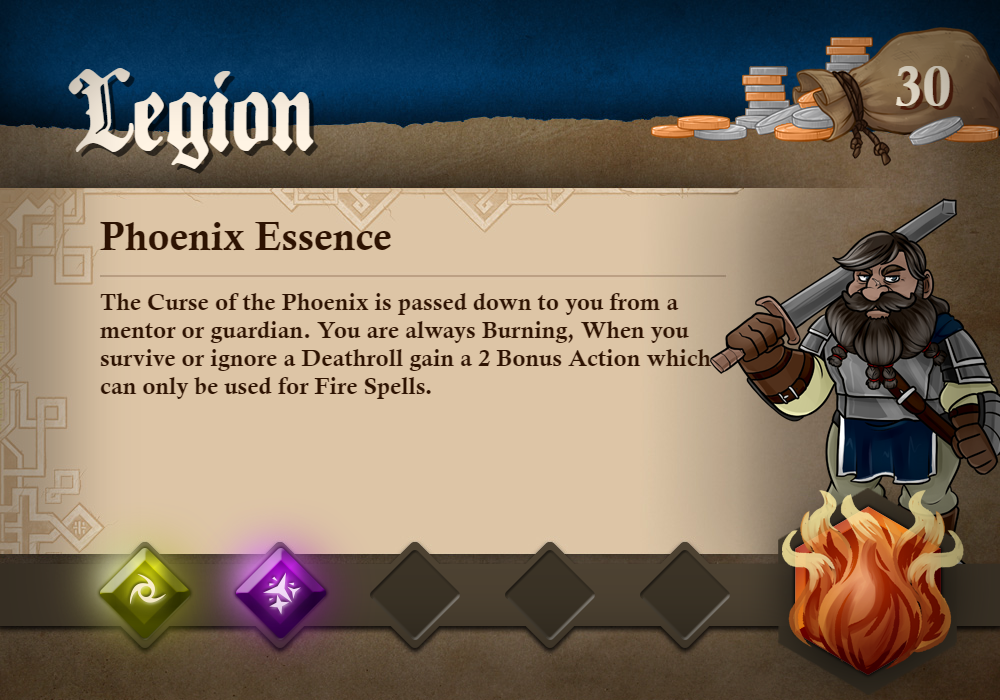 The main card of this Class is the Passiv Phoenix Essence. Its a cheap cards which will Permanently Burn the Character, preventing Anytime, Limited and Consumable abilities. This card also rewards the player for surviving Deathrolls since he can't prevent Damage or Insta-Deathroll attacks, but it also promotes the GM to use high Damage Abilities at other players. 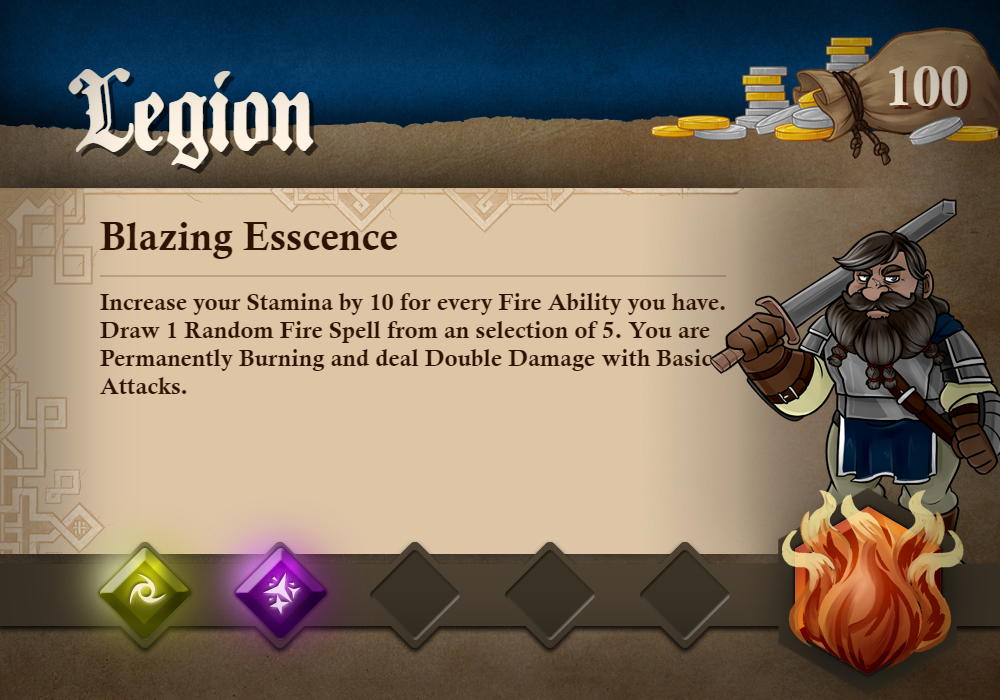 The other Passive Ability of the Legion is Blazing Essence. Its a 100Gold Passive which grants the Player a potentially powerful Fire Ability, however any Limited Abilities will not be useful unless you make a non-burning build. It will also grant the Player a Huge amount of Stamina, its probably to high and should be 5 Stamina for every Fire Ability or have a maximum of 50 extra Stamina. 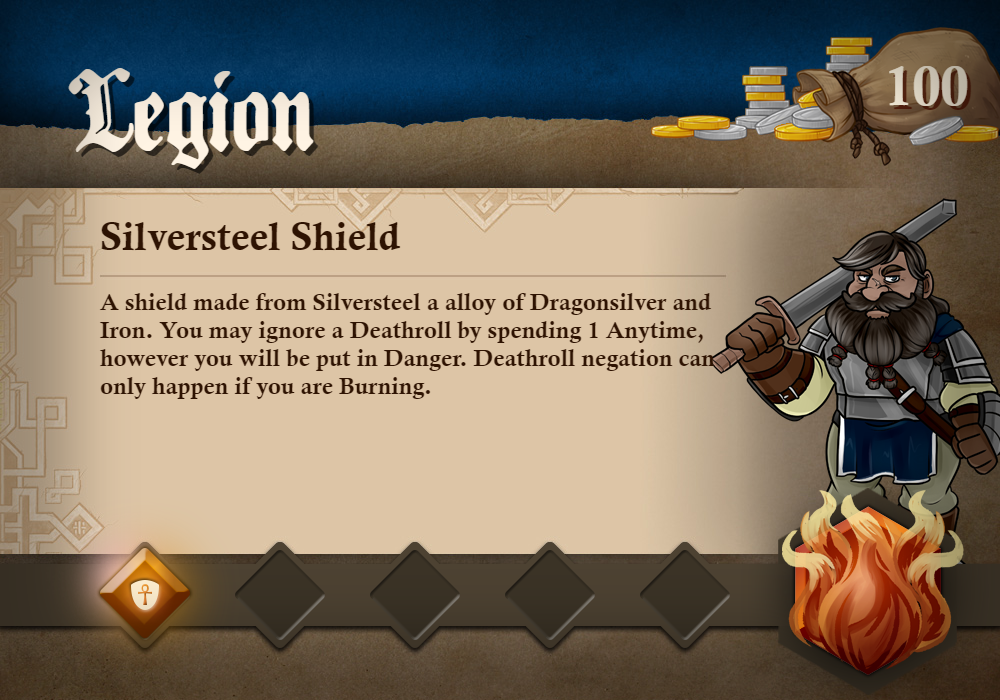 Silversteel Shield is one of the Must Have Cards of the class. Its a huge amount of Stamina for a low amount of gold. (But keep in mind that the Character can't Dodge). It will also allow the Player to prevent up to 3 Different Deathroll during combat, however only a Burning Build can do that. Also once a Player is in Danger, multiple Deathrolls can occur in a short amount of time. 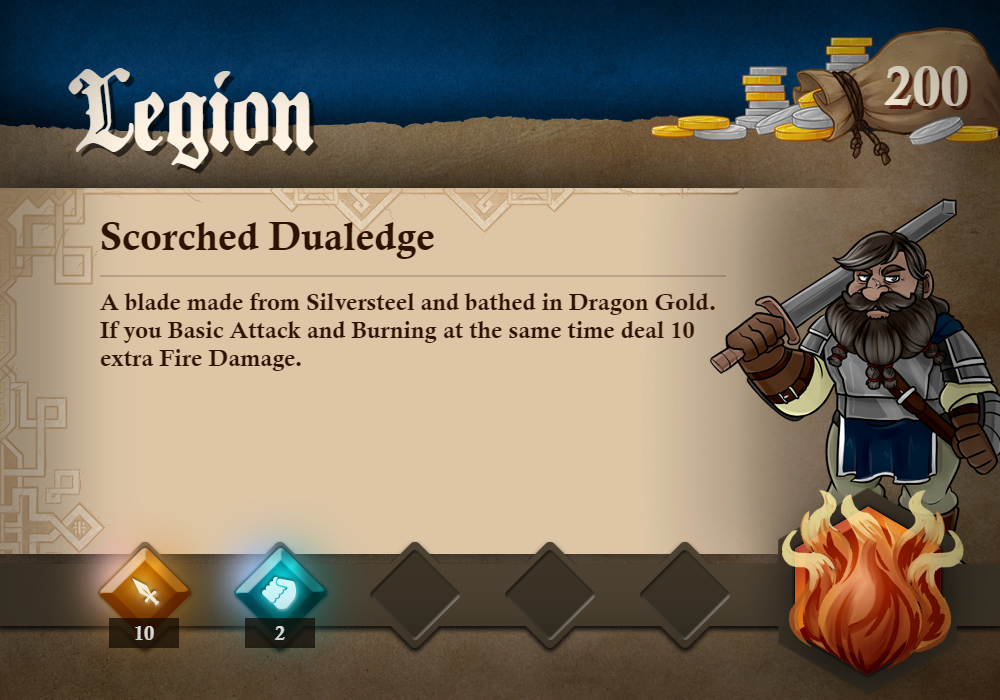 The Scorched Dualedge is also one of the main Cards of the Class. This blade allow the Player to do 30 Damage in a Basic Attack. But is very expensive. This class have Abilities which compliments Basic Attacks and can be combined to deal a large amount of Damage. Most player will not have enough Gold to buy both the weapon and the Shield or Blazing Essence. 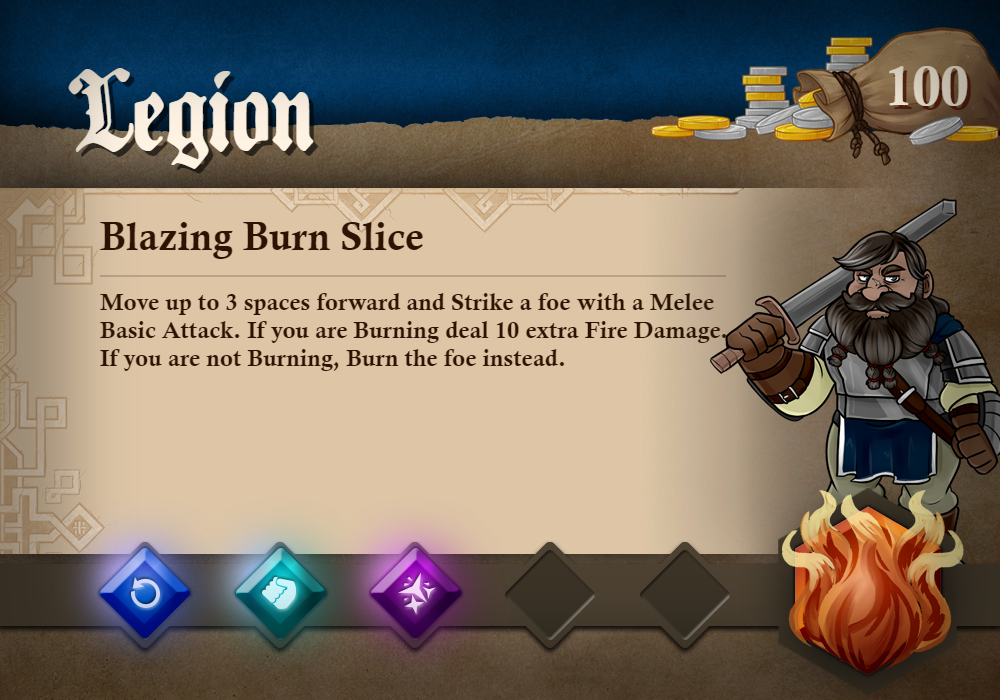 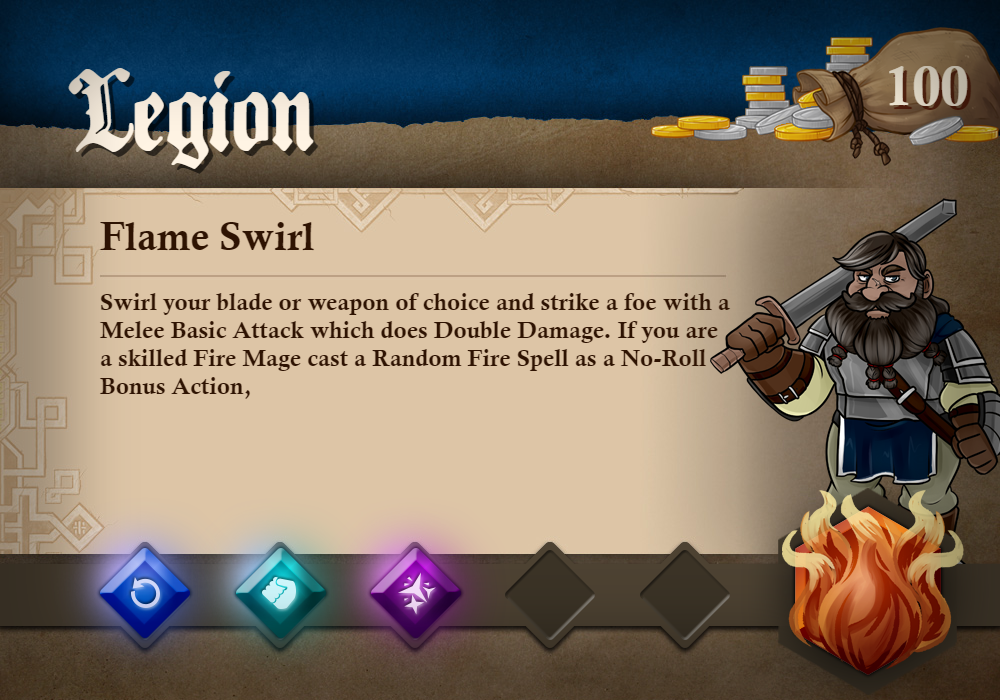 Blazing Burn Slice and Flame Swirl are both Basic Attack abilities which does 2 different things. the Burning Blaze Slice allow wielders of the Scorched Dual Edge to deal 40 Damage in a single Basic Attack and might be useful for player which delay burning by allow them to inflict Burn effect instead of high damage.

The Flame Swirl is a cool and fun Basic Attack which cast a random Fire Spell as a Bonus. 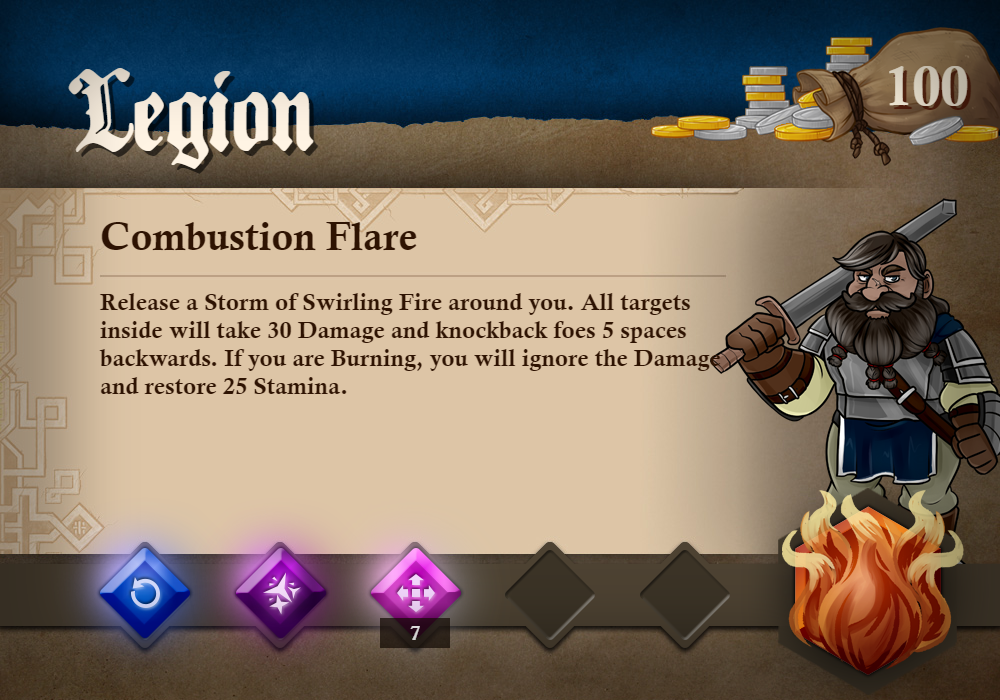 Combustion Flare is one of the non-Basic Attack abilities. Its a AoE attack which does knocback, high amount of Damage and heals the player if they are Burning. It might be useful if the player is surrounded be enemies if the GM chooses to swam, however they would only be able to use this ability on their turn. 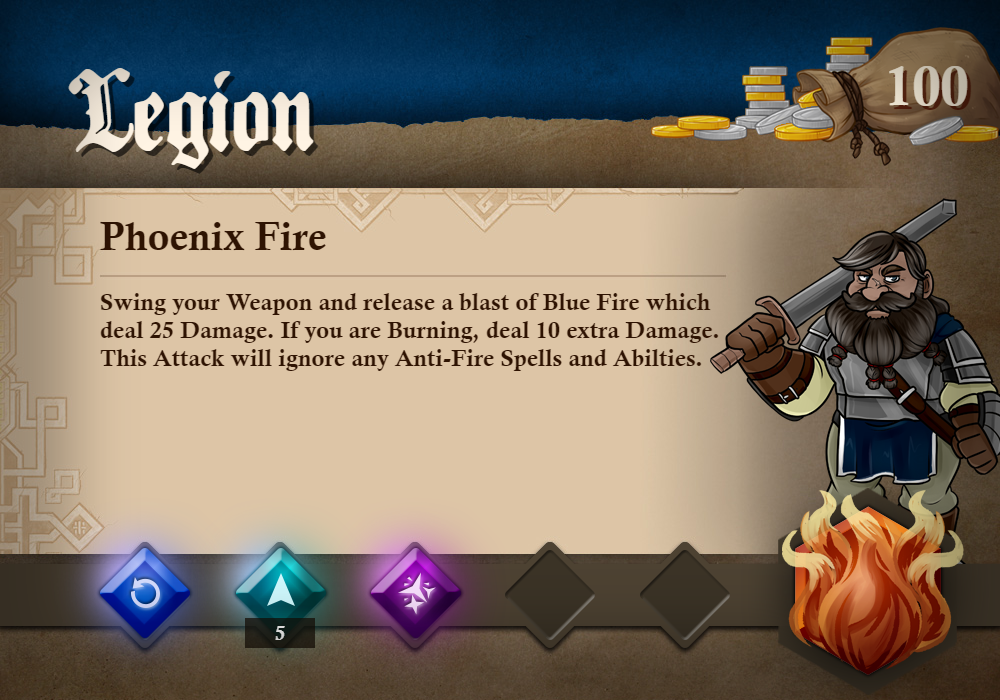 Phoenix Fire is a Close Range Line Attack which does as much damage as a Fireball. Its very simple and reward the Burn Build by increasing the Damage above Fireball Damage. 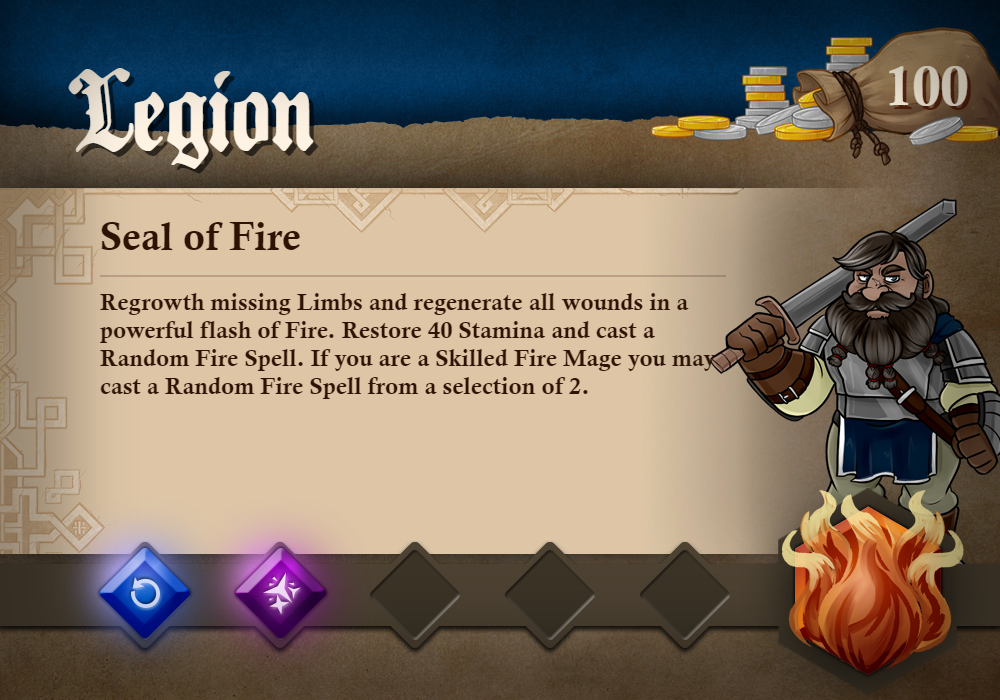 Seal of Fire is a powerful ability which can be used without burning. It will restore a huge chunk of Stamina and cast a random Fire spell. Its also a Fire Based healing ability which I think the game lacks. 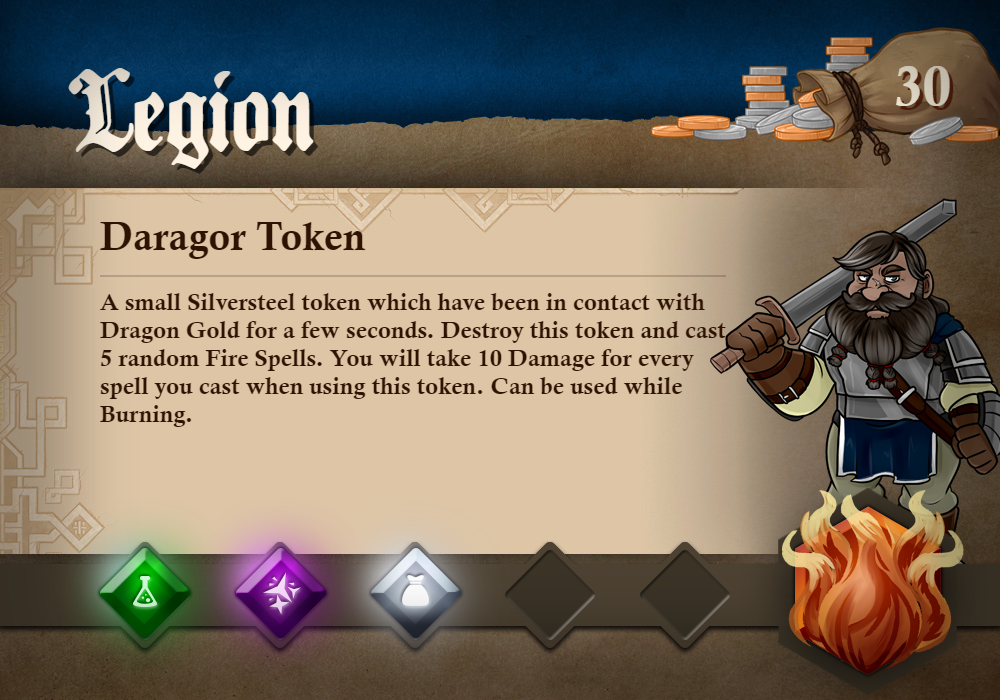 A fun consumable which they can pick up for a cool moment. It also has cool self-harming effect for a "I'm sacrificing my life force to be cool" moment.
So hope you like my class. Criticism are welcome.